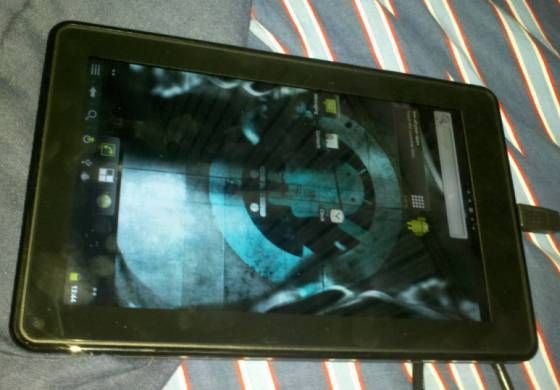 The Amazon Kindle Fire ships with a custom version of Google Android which is tied to Amazon’s digital book, music, movie and app stores. But shortly after the $199 tablet was released, early customers figured out how to root the tablet, install the Android Market, and make other changes. Now you can completely replace Amazon’s software with CyanogenMod 7, a popular custom version of Android based on Google’s open source software.

You can find step-by-step instructions, photos, and video of CM7 on the tablet in our guide for installing (or uninstalling) CyanogenMod.

The software is based on Google Android 2.3 Gingerbread, but JackpotClavin is already working to port Google Android 4.0 Ice Cream Sandwich to run on Amazon’s tablet.

Initial reports suggest that CM7 is quite responsive on the Kindle Fire, and most features are working properly. Audio isn’t working yet though.

Installing CM7 is a little tricky, because the Kindle Fire doesn’t have some of the features found on most Android phones and tablets. For instance, there’s just one physical button — the power button.

That means that while you can install the ClockworkMod Recovery utility and use it to wipe your device cache and load custom firmware, you can’t actually navigate through most menus. ClockworkMod usually lets you use volume buttons to move up and down, and a power button to select.

JackpotClavin has released a modified version of ClockworkMod that’s designed specifically for installing CM7 on the Kindle Fire. Basically you only need to hit the power button, because the option to “install update from sdcard” has been moved into the first position. Selecting it wipes all of your data and installs the update.zip file you need to copy to your device.

For now there’s no way to go back. If you install CyanogenMod 7, it will overwrite Amazon’s software — and you won’t be able to restore your device to the factory default condition. But JackpotClavin plans to release a stock recovery image eventually so that you can restore the original software if you like.

That said, this process is not covered by any warranty. So proceed with caution, and know that you may be out $199 if you damage your device while trying to install CyanogenMod.

The good news is that a number of users with Windows and Linux computers have reported success so far, and the process seems to work whether you’re using a Kindle Fire with version 6.0, 6.1, or 6.2 of Amazon’s software.

CyanogenMod users won’t be able to access Amazon’s Instant Video streaming service, since it doesn’t work on devices that have been rooted. Some of Amazon’s other software may also fail to work. But you can try install the Google Android Market and other Google apps and services either by flashing them at the same time as your update.zip or by following the same steps to install them with CyanogenMod that you can use with the stock Amazon version of the Kindle Fire software.

After switching to CyanogenMod, you’ll also have a persistent toolbar with home, back, menu and search buttons at the bottom of the screen and an app launcher which gives the tablet a more standard Android look and feel.

One reply on “CyanogenMod 7 available for the Amazon Kindle Fire”