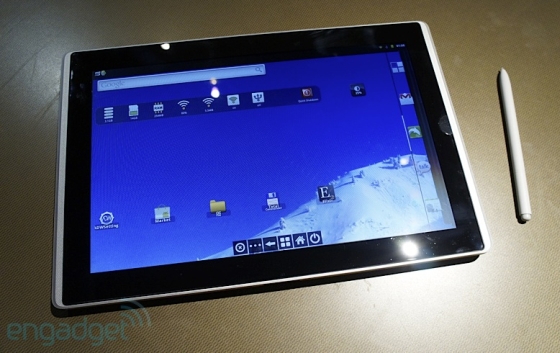 CUPP Computing’s PunkThis module is basically a tiny ARM-based computer, complete with a processor, memory, storage, and audio and video inputs and outputs. But what sets the PunkThis apart from most mini-computers is that it’s meant to fit inside another computer.

This summer CUPP started showing off a version designed to fit inside a netbook, allowing you to switch between Windows and Android environments just by tapping a button. Both operating systems are running at the same time, and you’re just switching from one to the other by pressing that button.

Now CUPP is demonstrating a new version designed to work with tablets. Engadget got a chance to check it out, and the video below shows an Asus Eee Slate EP121 tablet running Windows 7 and Google Android 2.3.4 simultaneously.

You can even shut down Windows or put it to sleep and use only Android.

The PunkThis module works with the capacitive touchscreen display and also supports the Wacom active digitizer and digital pen.

Out of the box, the Eee Slate has an Intel Core i5 dual core processor and 4GB of memory. It’s offers a pretty decent Windows experience, but the ability to run Android apps as well as Windows apps would certainly make the tablet more attractive.

This is just a technical demo at the moment. No products with the CUPP Computing PunkThis module are currently available, but the technology is pretty cool.