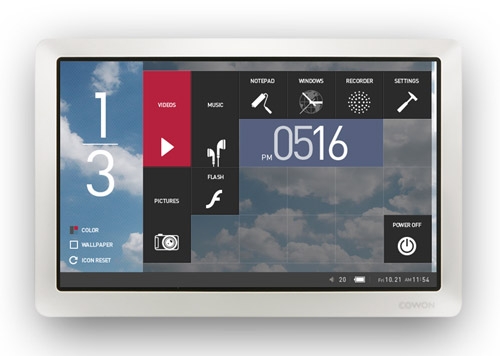 Cowon has never been a company that feels the need to match its competitors shot-for-shot, so it’s not a complete surprise to see them go back to the future with the newly-unveiled R7 “Super PMP.” Instead of running Android like the D3, the Cowon R7 is shipping with good old Windows CE 6.0 juxtaposed with a decidedly more modern, Metro-looking dashboard.

At 7 inches, you’d normally refer to a device like the Cowon R7 as a tablet, but with no internet connectivity option onboard it’s anything but. Instead, it’s built with functionality that mimics Cowon’s other devices — offering media playback (including full 1080P HD video), document and photo viewing, built-in voice recording, and a handful of games and studying tools. The R7 offers up to 64GB of internal storage, expandability via a microSD slot, HDMI output, and a battery good for around 10 hours of continuous video. Unfortunately, the R7’s display won’t show the true glory of your Blu-Ray rips: it’s limited to 800×480 pixels.

The Cowon R7 is slightly thicker than the BlackBerry PlayBook at 13.6MM, but it’s a tad lighter at 355G. Like the PlayBook, the R7 supports Flash — but without internet connectivity, it’s limited to what you can grab manually and load onto the device yourself.

For now, the R7 is only being offered up for sale in Cowon’s home country of Korea. It’s hard to say how North Americans would respond to an internet-free 7-inch media player like this, but at the right price Cowon could probably move a few units. Unless, of course, other companies start pumping out full-fledged tablets at this size at HP TouchPad prices.