Update: There’s also now an early build of CyanogenMod 9 based on Google Android 4.0 available for the Kindle Fire. It doesn’t work as well as CM7 yet, but if you want to take it for a spin, you can follow our step-by-step installation guide.

While Whistlestop is still hoping to unlock support for Bluetooth on the Fire’s wireless chip, the latest build of CM7 is pretty much fully functional. Meanwhile developers are continuing to work on CyanogenMod 9 for the Kindle Fire which will bring Google Android 4.0 Ice Cream Sandwich to the $199 tablet.

It’s also now easier than ever to install custom ROMs on the Kindle Fire. The Team Win Recovery Project 2.0 (or TWRP 2.0) tool was released recently, allowing you to backup and restore your system or flash custom software.

When that’s done you should have the FireFireFire bootloader and TWRP 2.0 recovery on your Kindle Fire.

If that doesn’t work, you may need to double-click the install-drivers.bat file before running the Kindle Fire Utility in order to allow your computer to recognize the Kindle Fire.

You can also check out our steps for installing TWRP 2.0 manually.

Using TWRP 2.0 to install CyanogenMod (or other software)

Once TWRP is installed you can use it to flash a custom ROM, backup or restore your device, or make other changes. Here I’ll show you how to use it to install the latest update.zip from Whistlestop.

If you’re running the stock Amazon Kindle software this will replace your operating system. If you’re already running an earlier version of CyanogenMod, this should just update your system while leaving your installed apps and settings inteact.

3. Turn off your Kindle Fire by pressing and holding the power button and choosing the option to shut down your device.

4. Tap the power button to turn on your tablet. 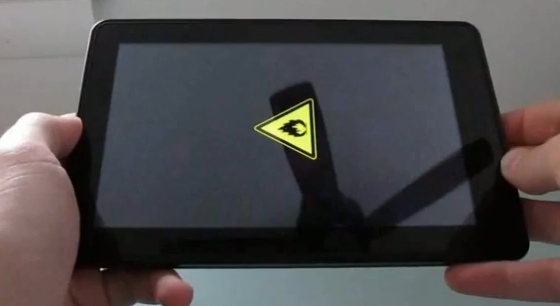 5. When you see the yellow triangle with a fire logo in the center, press and hold the power button for a few seconds and then wait for TWRP 2.0 to load.

6. Once TWRP is loaded, you can go to the backup section to backup your device. This will let you restore your Kindle Fire to its current state if anything goes wrong. I highly recommend doing this.

7. Next, from the home screen, tap the “install” button. 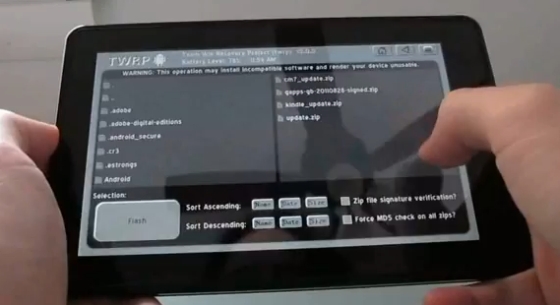 8. If the update.zip file is in the root directory of your SD card, you should see a file called update.zip in the window on the right. Go ahead and tap it. If update.zip is in another folder, scroll through the list of folders in the left window until you find it.

9. Tap the “flash” button to install the update.

10. When the install is finished, you can optionally tap the option to wipe the cache and dalvik cache (this is generally a good idea, but it’s not always necessary).

11. Tap the “reboot system” button to reboot your tablet.

That’s it. Your device will take a few minutes to reboot and then you’ll be running the latest version of CyanogenMod 7 or whatever operating system you just flashed. The next time you boot it will probably be much faster. 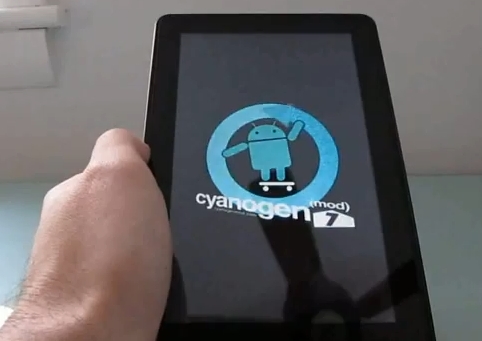 Incidentally, you can use the same steps to flash the latest official update from Amazon.