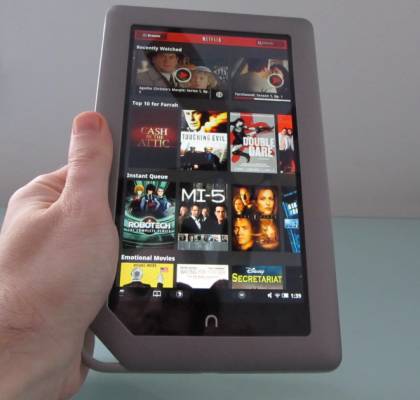 Barnes & Noble has been offering digital media devices under the NOOK brand for a few years. That includes NOOK eBook reader with E Ink displays and the NOOK Color and NOOK Tablet color Android tablets. But the company says the NOOK Tablet which launched in November is the fastest-selling device in the NOOK family so far.

In the company’s second quarter earnings announcement, Barnes & Noble says it’s already sold millions of NOOK devices and expects to sell millions more in the third quarter of the year.

While the announcement doesn’t spell out how many NOOK Simple Touch, NOOK Color, or NOOK Tablet devices have been sold so far, the NOOK Tablet is apparently the “fastest selling NOOK product in the company’s history.”

All told, B&N says it generated $220 million from its NOOK business last quarter. That includes the sales of hardware, accessories, and digital content including books and apps.

The $249 NOOK Tablet’s chief competitor is Amazon’s $199 Kindle Fire. Both devices have 1 GHz TI OMAP4 dual core processors and 7 inch, 1024 x 600 pixel displays. Both are designed for reading books, watching videos, surfing the web, or running apps. But Amazon maintains its own music and movie stores, which Barnes & Noble does not, while B&N offers more memory and storage.

Amazon hasn’t provided sales figures for the Kindle Fire, but it’s been the top selling product at Amazon for the past 8 weeks and the company has suggested that it’s already sold millions.

Both tablets have also turned out to be relatively hacker-friendly, although the NOOK Tablet has a locked bootloader which has so far prevented users from loading custom firmware.