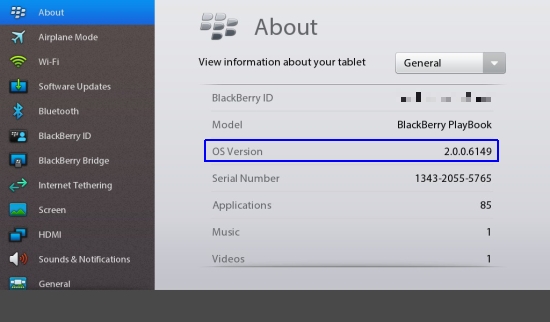 Research in Motion has released a new beta version of the BlackBerry PlayBook operating system. PlayBook OS 2.0.0.6149 for the tablet feels smother and faster than the previous beta nad fixes a number of quirks.

But there’s bad news for anyone that’s rooted a PlayBook using Dingleberry.

Update: Now you can use Dingleberry 3.0 to downgrade your tablet so that it can still be rooted.

Some users have reported that they’ve still got root access after updating, and that was the case with my own PlayBook. I was able to use WinSCP and reinstall the Android Market and Google’s core apps, but after a restart the PlayBook is rejecting the SSH key created by DingleBerry and I can no longer gain root access to its filesystem.

Apps I downloaded from the Android Market before updating the operating system have also been removed from the tablet. Android apps that had been converted into .bar files and installed stayed installed, but the update also erases the Android file system so any files stored in that area will be deleted when you update.

Still, I certainly don’t regret installing the update. The PlayBook web browser is faster than ever. Bridge apps are fully functional. And LED notifications have been turned on (when paired with your BlackBerry phone).

A2DP support for Bluetooth devices has been added, the camera app is now shooting stills and recording video, and spell check and autotext have begun taking shape.

It’s also worth noting that Android apps can make use of the camera now — sort of. Though you can fire up the Android camera app and take a picture (you’ll even hear the shutter snap), all the apps I tested wrote an Android logo to the camera folder instead of what I was actually shooting.

Nevertheless, it’s an encouraging sign and should guarantee that you’ll be able to use video chat in Android apps like Skype, Fring, and Qix once the OS 2.0 update is pushed to PlayBooks in February 2012.

If you really want to keep your Android Market access you should probably avoid this update for now. But if you want improved performance on your BlackBerry tablet, it might be a good idea to try the latest update and just install Android apps manually. You can find hundreds of PlayBook-ready Android apps at PlayBook BARs.

It’a also possible to roll back the update if you want to go back to a previous version of PlayBook OS 2.0 and run Dingleberry again.