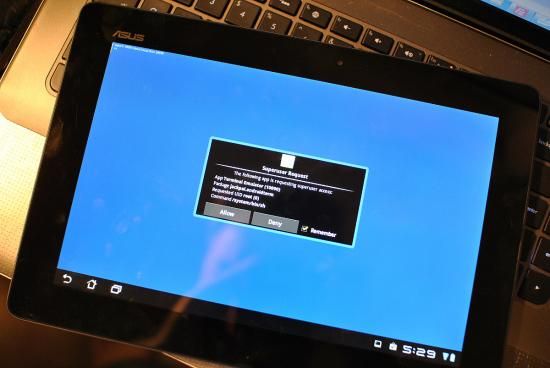 Sure, the Eee Pad Transformer Prime won’t actually ship in the US for a few more weeks, but when it does it looks like you’ll be able to root the first tablet with an NVIDIA Tegra 3 quad core processor on the day it arrives.

Android Central’s Phil Nickinson received a review unit from Asus, and discovered that you can root it with a one-click tool called Razorclaw. All you have to do is download and install the APK file on your tablet and run it.

Razorclaw was designed to work on the Asus Eee Pad Transformer and Eee Pad Slider, but apparently it works just as well on the new Transformer Prime.

Root access allows you to access files and settings that are normally protected. This lets you run apps that wouldn’t normally work on an Android device, including apps that let you create backups of your system data.

The Transformer Prime is a thin and light tablet with a Super IPS+ display that’s designed to be viewable outdoors or in, a high quality 8MP rear camera, and other premium features. It’s expected to go on sale in the US for $499 and up starting December 19th. Asus also offers an optional $150 keyboard docking station which lets you use the tablet like a laptop. The dock also has its own battery to provide longer battery life when the tablet is docked.

So far the Transformer Prime has received pretty good reviews, although some early testers suggest that the web browser is surprisingly sluggish, and that even with a quad-core processor, the Android 3.2 operating system can feel slow at times.