A German court has issued a ruling in a patent case between Motorola and Apple which could lead to a temporary ban on sales of iPhones and iPads in Germany.

Motorola is charging the Apple’s mobile devices are infringing on a patent it holds related to GPRS wireless devices. But while the court ruling could lead to a preliminary injunction against Apple, things aren’t quite cut and dry.

Basically Motorola would have to put up a €100 million bond for the injunction to take effect… and if the ruling is later overturned on appeal, Motorola could lose that money.

In addition to fighting the ruling in court, Apple can try to license the technology for Motorola or redesigned the iPhone and iPad to get around the issue, although that could be rather difficult. 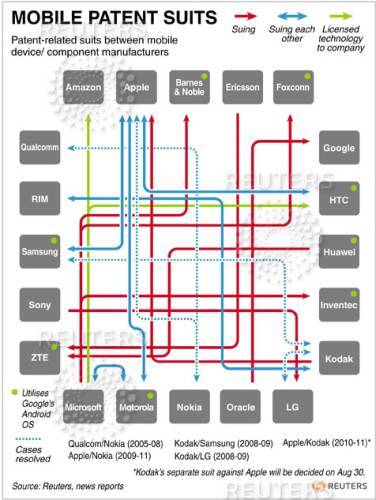 This is just the latest ruling in a long line of lawsuits between mobile device makers. This summer Thompson Reuters pout out a handy chart showing the latest lawsuits (at that time), and things just keep getting more and more complicated.

Apple has been aggressively going after companies that it says are infringing on its design and patent rights, with mixed success. The company has successfully won bans on some Samsung Galaxy Tab sales in Germany, but has failed to ban the same products in the US.

If this keeps up, soon you won’t be able to buy any tablets from any manufacturers in Germany.

3 replies on “Apple iPad, iPhone sales could be banned in Germany (lawsuits)”