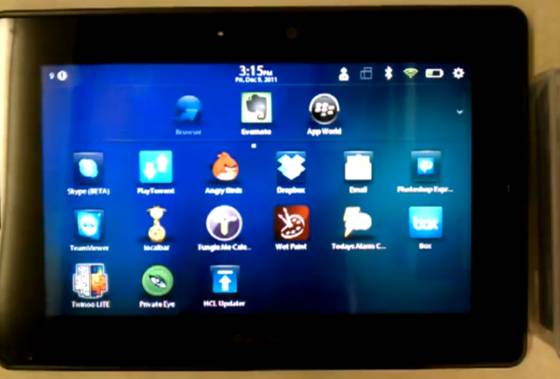 So you didn’t get a chance to pick up a BlackBerry PlayBook tablet for under $200 when they were available in November? Don’t worry, the 7 inch tablet will be on sale again after Christmas.

The folks at SprintFeed got a leaked copy of the Sprint after-Christmas sale promotion, and the US wireless retailer will be selling PlayBook tablets for $199.99 from December 26th through January 7th.

The BlackBerry PlayBook has a 1 GHz TI OMAP4 dual core processor, 1GB of RAM, and 16GB of storage. There are also 32GB and 64GB models available.

While the tablet looks a lot like the Amazon Kindle Fire, it has volume buttons, more storage and memory, and front and rear cameras. The PlayBook also runs BlackBerry Tablet OS instead of Android — but if you install BlackBerry PlayBook OS 2.0 beta you can install and run many Android apps on the tablet.

If you’re a bit more adventurous, you can also root the PlayBook and install the Google Android Market which makes finding and installing third party Android apps much simpler.

There are still some things the PlayBook can’t do. A number of Android apps won’t run properly because the PlayBook doesn’t have the hardware to support them. And if you’re sticking with the stock BlackBerry operating system the selection of third party apps is even weaker.

But the PlayBook is still a pretty great piece of hardware for $200.

3 replies on “$200 BlackBerry PlayBook tablets coming back after Christmas”