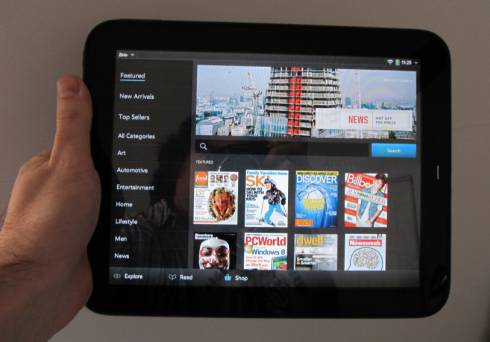 The HP TouchPad may have been discontinued this summer, but the 9.7 inch tablet is getting more useful all the time. HP has continued to push software updates which improve performance and add features even after the tablet was canceled, and third party developers have continued releasing high quality apps for the webOS tablet.

The latest is a digital magazine app from Zinio. The company also offers iOS and Android apps that allow you to purchase single issues of popular magazines, sign up for annual subscriptions, and read magazines on your mobile device.

Unfortunately some of the subscription prices are less than ideal. An annual subscription to Wired Magazine, for instance, costs $19.99. The same subscription costs $59.96 through Zinio — even though distribution costs are much lower and what you receive is basically an exact digital copy of the magazine, complete with advertisements. That’s a steep price to pay to avoid involving the US Postal Service in your magazine delivery route.

Even if you have no intention of paying to read magazines on your mobile device, you might want to check out the app — Zinio offers up a handful of free articles from a variety of magazines. The company rolled out the Zinio Explore feature for Google Android Honeycomb tablets a few weeks ago, but it’s also baked into the TouchPad app.

Since Zinio Explore for Android only supports Android 3.0 and up, you can’t access free articles from the Zinio app if you’re running Android on the HP TouchPad. That’s because the CyanogenMod developers that have ported Android to run on HP’s tablet only offer Android 2.3.7 at the moment. But all you have to do to use Zinio Explore is reboot your device to webOS.

Installing Android on the HP TouchPad is a great way to expand the number of apps available for the device. There are hundreds of thousands of apps available for Android, but just around 10,000 apps for webOS — and many of them are smartphone apps which don’t scale well to the TouchPad’s large display.

But there are a growing number of webOS apps that make the TouchPad worth using even if you never try installing Android. Zinio, Picsel Smart Office, Splashtop, and the Amazon Kindle app for webOS, for instance, make the tablet a pretty good tool for leisure reading or for getting some work done.