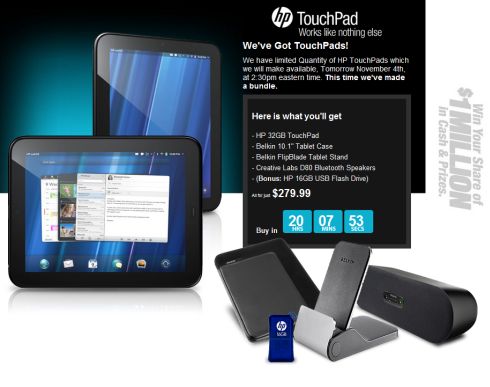 The TouchPad is a 9.7 inch tablet with a 1.2 GHz Qualcomm Snapdragon dual core processor and webOS operating system. It launched in July to lackluster response, and HP canceled the tablet in August. But when HP lowered the price of a 16GB tablet from $499 to $99 and dropped the 32GB tablet price from $599 to $149, suddenly the TouchPad was a runaway success. Virtually every store that offered the liquidation pricing sold out almost immediately.

HP placed one more order with manufacturer and some customers who had placed orders through HP’s business site received shipments recently, but HP announced in October that it was officially out of stock — but that some retail partners might still have tablets to sell.

This week Best Buy began offering 32GB HP TouchPad tablets to customers for $149 — but only with the purchase of a qualifying HP or Compaq computer.

Tomorrow TigerDirect will try a similar promotion. You’ll be able to pick up one of the last 32GB TouchPad tablets around — but you won’t be able to snag it for $149. Instead, TigerDirect is offering a $279.99 bundle which includes

That’s still a pretty good price for a tablet that was suppose to sell for close to $600. But if you’re really looking for a budget tablet, you might want to consider a $200 Amazon Kindle Fire, Kobo Vox, or Velocity Micro Cruz T408.

Still, while the TouchPad may be discontinued, it’s not exactly dead. HP and third party companies are continuing to provide OS updates and new apps, and there’s a method for installing Google Android on the tablet which greatly increases the number of apps that you can run on the TouchPad.