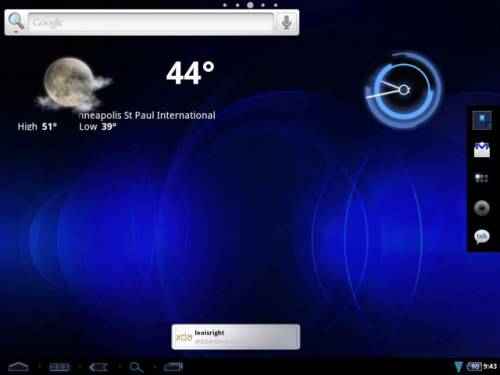 Update: The download links for new ROM have been temporarily removed while the team continues to work on the software. A public beta will eventually be available.

The new ROM comes from Team Xron, and it replaces some of the icons in CyanogenMod with versions designed to look more like Google Android 3.x Honeycomb icons. The themes and wallpapers have also been tweaked to look a little more like those you’d find on a Honeycomb tablet — even though Xron’s ROM is still running the same Android 2.3.7 software you get with CyanogenMod.

The Team Xron build also changes a number of icons and widgets throughout the operating system to look more Honeycomb-like. The CyanogenMod boot animation has also been replaced with the animation used in the Google Nexus One smartphone.

You can install Team Xron’s ROM the same way you would install CyanogenMod — just download the Xron version of Android and use it in place of the CyanogenMod files. The developers recommend using ACMEUninstaller to remove CyanogenMod before you get started though.

ReverendKJR has also put together a video showing the installation process.

The HP TouchPad tablet features a 9.7 inch, 1024 x 768 pixel display, a 1.2 GHz Qualcomm Snapdragon dual core processor, and ships with the webOS 3.0 operating system. The tablet was discontinued this summer, but became popular with bargain hunters when HP slashed the price by as much as 80 percent to liquidate remaining inventory.