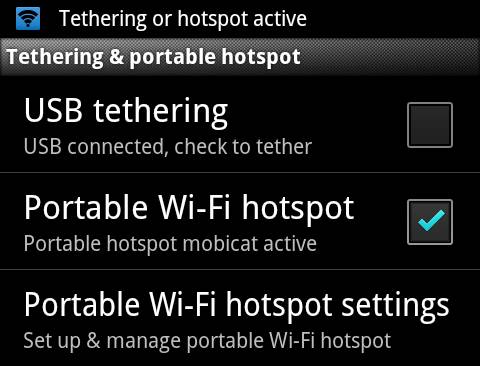 Anyone planning to buy an internet tablet has to ask one question. It’s not whether to choose a iPad or Android, and it’s not whether you want a 7 inch or 10 inch screen.

While a 3G or 4G model might be more flexible, it also comes at a far greater cost. Mobile broadband plans in the US start at $30 per month, and heavy users might have to pay upwards of $80 per month.

For many, if not most, users, that cost comes in addition to a monthly smartphone data plan. Getting a 3G tablet, then, means paying twice for data.

A commonly suggested solution involves using the first data plan to cover the second. For an additional fee, (usually around $15 per month), US cellular carriers allow users to tether their smartphones to other devices, such as laptops and tablets. Since that’s about half the price of the lowest-tier tablet data plan, it might appear to be a viable solution.

But while tethering a smartphone to a tablet does provide many advantages, it also brings on burdens that might render it a poor option for certain users.

1. Only paying once for data

Smartphone users already pay around $30 per month for a data plan. It seems excessive to add another $30 to $80 for a tablet data plan, especially when it’s only practical to use data on one device at a time.

Eventually carriers may create multi-device data bundles, but until that day comes owning both a smartphone and a 3G tablet will remain an expensive endeavor. By tethering users pay only once, with an extra $15 tethering fee, to power both devices.

By paying for a monthly tethering plan, users can not only use their smartphones to power their tablets, but also their laptops. While tablets are versatile devices that can take the place of laptops, oftentimes the laptop is the right tool for a certain job.

Having an always-on internet connection can be helpful. That option is not available for users who own a 3G tablet without a tethering plan.

Many 3G tablets also come in WiFi-only versions, and the WiFi versions are always cheaper. Just look at the Samsung Galaxy Tab 10.1. It costs $650 total (though only $400 up front), while the WiFi-only version costs $500.

The iPad is priced similarly. Users will not only save money by paying for just one data plan, but they’ll also save in up-front device costs. Someone who buys the Galaxy Tab 3G model will pay $1,320 in a two-year span on top of their smartphone plan ($650 device, minus $50 rebate, plus $30 per month for the lowest-tier data plan).

While Sprint remains a holdout, most US carriers have moved towards capping monthly data usage. Having both a smartphone and a tablet on a single data line could put some users over the lowest-tier limit.

Using T-Mobile again as an example, a user who might have previously gotten by with a $70 monthly plan, which provides 2GB of full-speed data, might not be able to do so with another device dipping into that allotment.

From recent personal experience, I can attest that even 5GB is a relatively low cap. With any device as powerful as a tablet it’s easy to hit that limit in relatively little time.

Smartphones might seem like little computers, but they still play a role as our cell phones. That makes their battery lives valuable in many ways. Unfortunately, tethering sucks a smartphone battery dry.

This is especially true if the smartphone is used as a WiFi hotspot, which is a common form of tethering. But even with a USB cable tether (and not all tablets have USB ports), the constant use of 3G or 4G signal can drain the battery at a rapid rate. Low or no battery on a smartphone renders both devices less usable, or unusable.

Yet it seems like that issue would crop up frequently if there doesn’t happen to be a wall socket in sight.

The pros might outweigh the cons in number, but the cons are weighty factors. Data caps can eat into the savings of having a WiFi-only tablet, and the battery life can be a deal breaker for anyone who is not frequently near a charging port.

Surely there are users who will benefit from tethering. Those who don’t plan to use the 3G features often come to mind first. The budget-conscious, too, can make a tethering plan work to their great advantage. It take some restraint, but the savings are certainly there for the taking.

Heavier users, and in particular heavy smartphone users, will find many difficulties in tethering a WiFi tablet. The battery and data issues render it less viable than a 3G tablet, even if the 3G tablet costs a little more.

Joe Pawlikowski edits both BBGeeks and AndGeeks, blogs that provide users with information on how to get the most out of their BlackBerry and Android devices.

25 replies on “Should you tether your tablet to your phone, or just get a 3G tablet?”