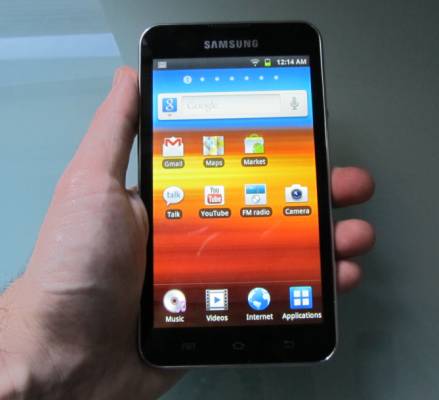 The Samsung Galaxy Player 5.0 is a portable Android device with a 5 inch, 800 x 480 pixel display, a 1 GHz processor, 512MB of RAM, and 8GB of storage. It includes Bluetooth, WiFi, and GPS wireless features, and basically does everything an Android smartphone can do — except make phone calls.

It even supports the Google Android Market.

The Galaxy Player is also a lot cheaper than an Android smartphone. It sells for about $270, which might seem like a lot — until you realize that there’s no monthly voice or data fee to pay. Most decent Android phones actually cost $500 or more if you buy them without a service contract.

For the last few years there hasn’t really been a strong Android alternative to the Apple iPod touch. Most of the low cost Android portable media players we’ve seen have suffered from lousy screens, slow processors, poor battery life, or lack of access to the Android Market.

At first glance, the Samsung Galaxy Player 5.0 doesn’t appear to have any of those problems. Samsung loaned me a unit for review purposes and after playing around with it for a few hours I can say that it feels reasonably fast, has a decent display with good viewing angles.

I’ve run a few benchmarks, and while the portable media player isn’t exactly state of the art, it holds its own against older smartphones like the Google Nexus One or recent budget tablets such as the $200 Velocity Cruz Micro T408.

For $270, the Galaxy Player 5.0 is about $70 more expensive than an entry-level iPod touch. And while it has a larger display, it’s not a sharper display. The latest portable media players from Apple have 960 x 640 pixel screens.

But the iPod touch doesn’t have GPS, a microSD card slot, or a camera flash or auto-focus capabilities. The Galaxy Player has all of those things.

I haven’t decided yet what I think about the five inch display. On the one hand, it could make reading or viewing photos of videos more comfortable for some users. But the device doesn’t have any more pixels than your average smartphone to go with that big display, so it’s really just less sharp than a typical phone with a 4 inch screen.

The 5 inch screen also makes the Galaxy Player a bit more difficult to hold in one hand or slide into a pocket than a smaller device such as the iPod touch. I’ve also found I have a little difficulty reaching from one end of the screen to the other with my thumb when holding the device in one hand. This can make entering text or playing games a little tricky.

Overall, I’m pretty impressed with the Galaxy Player 5.0 right now, but I’ll be testing the battery life, overall performance, and general usability of the device over the coming days. Stay tuned for a more detailed review.