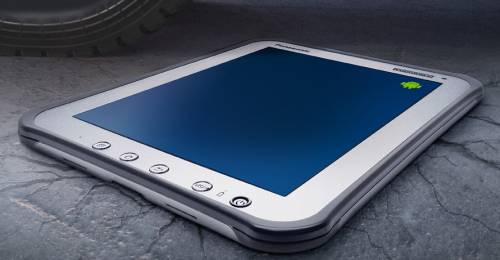 The company’s new ToughPad family of products feature rugged case designs that are water and dust resistant, designed for use in extreme heat or cold, and which feature anti-glare, outdoor readable displays.

The first model will be the Panasonic ToughPad A1 with a 10.1 inch display, but a 7 inch ToughPad B1 will launch in the fall of 2012.

Panasonic says the tablet can be used in temperatures ranging from 14 degrees to 122 degrees Fahrenheit. It can withstand a fall of 4 feet, and can be used at altitudes as high as 15,000 feet. The tablet also comes with a 3 year warranty, which is about three times longer than the standard warranty you get with most other tablets.

Rugged design comes at a cost though. While most Android tablets have starting prices under $500, the ToughPad A1 will start at $1299. But it’s not really aimed at the budget-conscious crowd. Instead we’re looking at a tablet that can be used in industrial settings, camping expeditions, or other harsh environments.

While the rugged case is nice and all, the ToughPad A1 doesn’t skimp on other high-end tablet features. It has a magnesium alloy chassis, a 1.2 GHz Marvell dual core processor, 1 GB of RAM, 16GB of flash storage, and runs Google Android 3.2 Honeycomb.

The tablet has a 10.1 inch, 1024 x 768 pixel display with support for multitouch finger input or a digital pen with an active digitizer.

The 4590mAh battery offers up to 10 hours of run time, and it’s user replaceable.