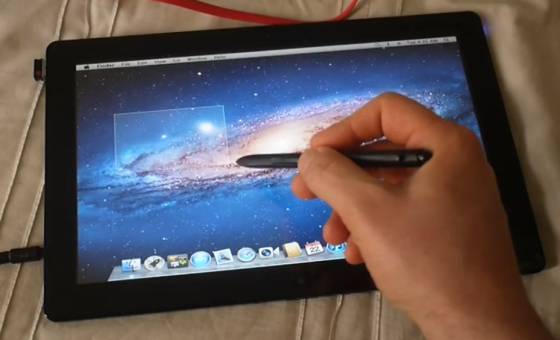 The Samsung Series 7 Slate PC is a tablet with an 11.6 inch display and an Intel Core i5 processor. It has 4GB of RAM, a solid state disk, and ships with Windows 7. But the tablet has all the hardware you’d need to run a variety of operating systems including many Linux distributions or even OS X.

The tablet supports touchscreen input from a fingertip or a stylus, and can also work with a Bluetooth keyboard. Overall, the Series 7 Slate looks a lot like the tablet many people thought Apple was going to come out with before the company introduced the iPad.

While the iPad is basically a larger iPod touch with an operating system and apps designed specifically for touch input, the Samsung Series 7 (and other slate computers with Intel processors) can run the full desktop version of OS X.

Honestly, OS X is still easier to navigate with a mouse and keyboard than a finger or stylus. But Apple’s operating system for desktop and laptop computers is definitely more touch-friendly than it used to be, thanks to large icons, widgets, support for full screen apps, and a full-screen app launcher called LaunchPad.

You can find more details on installing OS X on the Samsung slate (or other tablets) at the tonymacx86 forum.