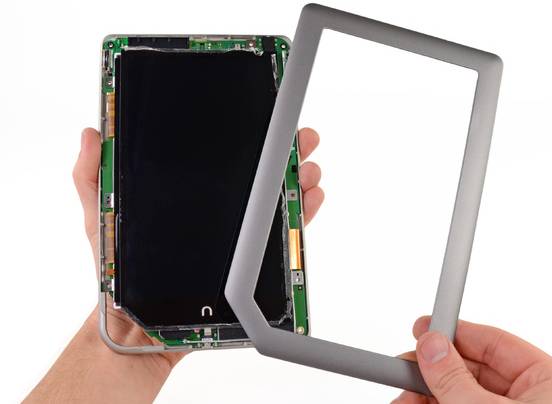 The Barnes & Noble NOOK Tablet may be a shiny new 7 inch tablet with a dual core processor, but the tablet sure looks a lot like the 2010 NOOK Color. The new model uses the same case design as the original, but comes with more RAM, more storage, and a faster processor.

But the folks at iFixit have discovered that it’s not just the case that the NOOK Tablet borrows from the NOOK Color. They dissected the new tablet to look at its insides and discovered it also has the same display as the NOOK Color and not only does it use the same 4000mAh, 14.8Whr battery, but the battery is actually labeled NOOK Color.

Once the hood is off you can also get a look at the processor and other chips, and notice that the CPU, memory, and storage are all soldered to the motherboard which means they won’t be particularly easy to replace or upgrade. Even the microSD card slot and headphone jack are soldered in place.

Fortunately it looks like the screen might be fairly easy to replace if you’re not scared of opening up the tablet since it’s not fused to the front panel. It’s just connected with a lot of adhesive material.