On Monday Barnes & Noble is expected to introduce a new NOOK Tablet for $249. According to leaked documents the company also plans to drop the price of the NOOK Color and NOOK Simple Touch — but some retailers aren’t waiting until Monday.

Best Buy announced a prie drop for the NOOK Color today. You can now pick up the 7 inch color eReader for $199.99

. I haven’t found anyone offering the NOOK Touch for $99 yet, but the new price should take hold soon.

The eReader runs a modified version of Google Android, and users can use it to run some third party apps as well as reading eBooks, magazines, and other content from Barnes & Noble. Hackers have also been loading custom versions of Android from an SD card for almost as long as the NOOK Color has been on the market. 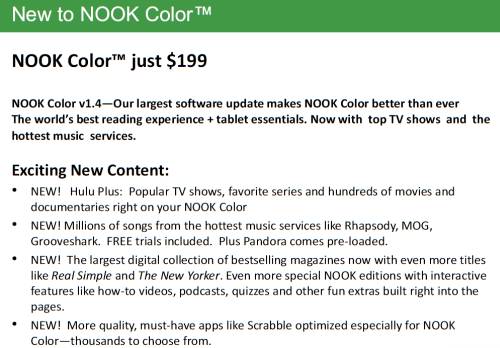 The decision to keep selling the NOOK Color even after introducing the NOOK Tablet is interesting. the new Barnes & Noble tablet looks almost exactly like the NOOK Color, but it has a faster 1.2 GHz TI OMAP4 dual core processor and twice the memory and storage, at 1GB and 16GB respectively. That’s a pretty good deal for just $50 more.

Both devices will compete with the new Amazon Kindle Fire — but Amazon’s $199 tablet will have just 8GB of storage, a 1 GHz OMAP4 dual core chip, 512MB of RAM, 8GB of storage, and no SD card slot.

The key difference is that Amazon has already built a digital ecosystem that extends far beyond eBooks. While Barnes & Noble will load up third party apps such as Hulu Plus and Pandora to deliver music and videos on its devices, Amazon already has Amazon MP3, Amazon Instant Video, the Amazon Kindle Store, and the Amazon Appstore for Android.

Ultimately, I think the Barnes & Noble devices will appeal to existing B&N loyalists and hackers who are interested in utilizing the microSD card slot, while the Amazon Kindle Fire will appeal to Amazon fans looking for a media consumption device — although I do expect hackers will find ways to root the Fire and make other changes (and Amazon officials don’t seem to have a problem with that).