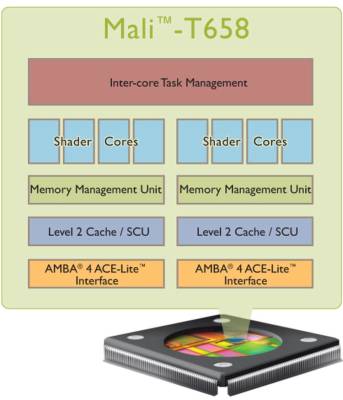 The new ARM Mali-T658 design is aimed at pones, tablets, and internet-connected televisions. The new design will be available in future ARM Cortex-A7 and Coretex A-15 processors. The chip designer says Fujitsu, LG, Samsung, and NuFront will support the new designs.

Since the graphics processor with up to 8 shader cores works independently from the CPU, future chips will be able to take advantage of the high performance graphics without running at full speed. In fact, Mali-T658 can work with ARM’s new big.LITTLE architecture, which means that you should be able to watch 3D or HD video or perform some other tasks while using a secondary low power processor core.

The Mali-T658 isn’t the only game in town though. NVIDIA’s new Tegra 3 chip features a quad-core CPU, a low-power companion CPU, and a 12-core graphics processor. The first device expected to ship with a Tegra 3 chip is the Asus Eee Pad Transformer, which is due out in December. Until devices with the next-generation Mali chip start shipping it’s tough to say which GPU will offer better graphics performance.