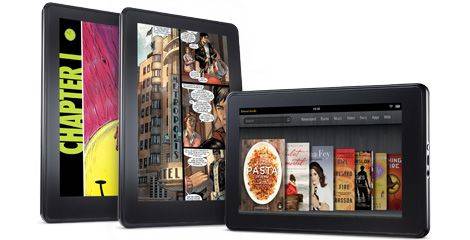 Amazon’s first media tablet hasn’t even started shipping yet, but details about the company’s next tablet are already starting to leak. According to DigiTimes, the next-generation Amazon Kindle Fire could have an 8.9 inch display.

DigiTimes tends to get its information from parts suppliers and manufacturers in Taiwain, who also say that future models could have 9.7 or 10.1 inch screens.

The first Kindle Fire tablet is expected to ship on November 15th. It will have a 7 inch, 1024 x 600 pixel LCD display, a 1 GHz dual core processor, and 8GB of storage. Unlike many Android tablets the Kindle Fire won’t have a webcam, GPS, or even an SD card slot for expansion. But it will be cheap, selling for just $199.

What really sets the Kindle Fire apart is its integration with Amazon services. It will run a customized version of Android, run apps download from the Amazon Appstore, offer eBooks from the Kindle Store, music from Amazon MP3, and videos from Amazon’s Instant Video store.

A larger display would offer more screen real estate for watching movies, surfing the web, or reading eBooks — although I suspect that 7 inch tablets will be more popular with customers specifically looking for eReaders. The smaller devices are lighter, easier to hold, and about the size of a paperback book.

While Amazon continues to offer the Kindle DX 9.7 inch eReader with an E Ink display, the company’s focus over the past few years has been on smaller devices with 6 inch screens. Most of Amazon’s competitors have also settled on 6 to 7 inch displays.

Meanwhile Amazon’s top competitors in the digital book space are also getting into the tablet game. The Kobo Vox 7 inch tablet started shipping this week for $199.99.

4 replies on “Next-gen Amazon Kindle Fire could have an 8.9 inch screen”