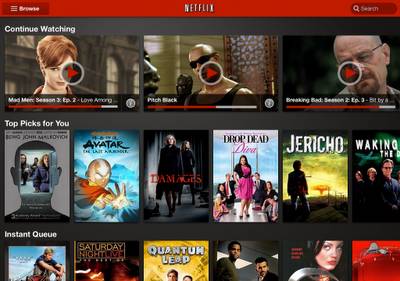 Netflix has been offering a mobile app for Android phones and tablets for a while, but up until today Netflix looked exactly the same on a 10 inch tablet as it did on a 4 inch smartphone — just bigger. Today Netflix is introducing a revamped Android app with a new tablet-friendly user interface.

The home screen now features several large rows of TV show and movie images sorted into categories including your queue and personalized recommendations based on your viewing history. There’s also a nice new Continue Watching section at the top that not only shows you videos that you’ve started to watch but haven’t finished, but which also shows a progress meter.

While most “tablet” apps for Android require Android 3.0 or higher to run, the new Netflix app is designed to run on the Amazon Kindle Fire and Barnes & Noble NOOK Tablet. Both of those tablets run modified versions of the Google Android 2.3 Gingerbread operating system.

The new app should be available from the Android Market soon. Netflix is also working on a new version of its iPad app which will offer a similar experience.