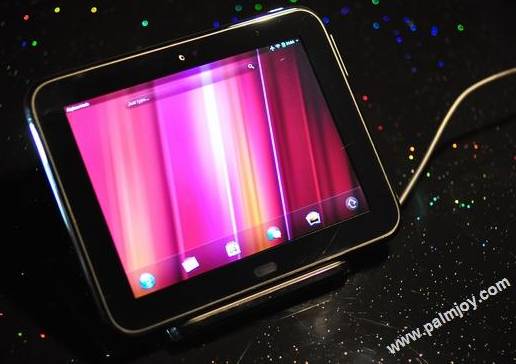 Before HP decided to discontinue the TouchPad line of webOS tablets, the company had been working on a 7 inch model to compliment the 9.7 inch HP TouchPad tablet. It was called the HP TouchPad Go, and it was never released.

But the folks at Chinese site PalmJoy recently got their hands on a prototype, and it looks like a really nice little device.

The TouchPad Go prototype has a 6.95 inch, 1024 x 768 pixel capacitive touchscreen display. It has a sturdy Corning Gorilla Glass screen.

The tablet has a 1.5 Ghz Qualcomm Snapdragon dual core processor. It’s basically the same chip found in the larger HP TouchPad tablet, but the clock speed is 300 MHz higher.

The tablet also features a 1.3MP front-facing camera, a 5MP rear camera with LED flash, GPS, Bluetooth, WiFi, and 3G. HP never released a 3G version of the larger TouchPad, and the 9.7 inch model doesn’t have a rear-facing camera — which makes some sense, since the larger your tablet, the less likely you are to hold it up to the world at large and use it as a camera. Front-facing cameras, on the other hand, are ideal for video chat.

You can find more photos of the tablet that might have been at PalmJoy.