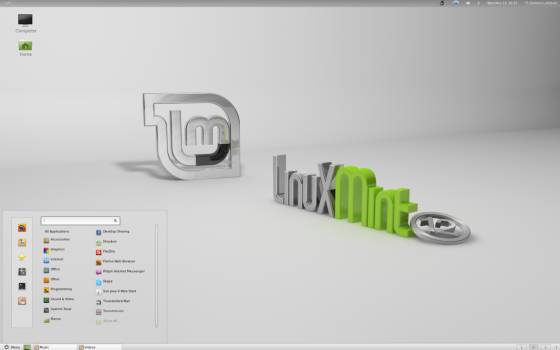 Ubuntu may grab more headlines than most Linux-based operating systems (unless you count Android, which uses a Linux kernel), but over the past few years Linux Mint has been nipping at Ubuntu’s heels. Today the Mint team released Linux Mint 12, which packs a number of software improvements and new artwork.

For the past few weeks Mint has been ahead of Ubuntu in the DistroWatch ranking, which measures the number of pages views for various Linux operating systems. While some journalists have suggested that Mint is now the more popular operating system, I think all the figure really tells us is that… more people are clicking the Mint page at DistroWatch. That could have more to do with DistroWatch’s audience than anything.

But Mint is an impressive operating system which is based on Debian and Ubuntu and which can run most apps designed for those platforms. It also uses the GNOME 3 desktop environment, which could make Mint an attractive alternative for Ubuntu users that are turned off by the new Unity user interface.

Linux Mint 12 includes the new MGSE (Mint GNOME Shell Extensions) feature which lets you use the latest features in the new version of GNOME, but continue to use the application menu, bottom panel, and other features much the same way you have with previous versions of Linux Mint (or other operating systems that use the GNOME desktop environment).

the operating system also includes several new themes and desktop backgrounds. The default search engine is DuckDuckGo, but users can change their search engines. Mint is also now partnering with some search engines to share revenue earned from user searches.

Linux Mint 12 is available for computers with 32-bit or 64-bit x86 processors with 512MB or more of RAM, 5GB of disk space, and a screen resolution of 800 x 600 pixels or higher. You can find download links in the official blog post announcing the release.