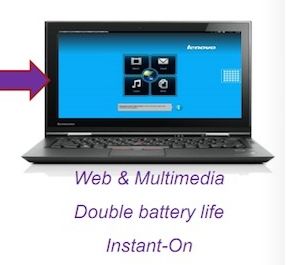 Lenovo is reportedly planning to launch a high-end business laptop later this month which will be able to run Windows and Android. The Verge caught wind of a new notebook called the ThinkPad X1 Hybrid.

On the outside, the laptop looks just like the existing ThinkPad X1 ultraportable notebook. But the new hybrid model will also have an “instant media mode” which appears to be based on Google Android.

The idea is that you’ll be able to boot the laptop into a full Windows desktop to run productivity apps — but you can also tap a button and start working right away if you opt for the instant media mode, likely by using the Android web browser, media players, and other light-weight apps.

This isn’t the first time we’ve seen companies load laptops with some sort of “instant on” software designed to let you use the computer without waiting 45 seconds or longer for Windows to load… but honestly, if you put your computer to sleep instead of shutting it down most of the time, there’s not much advantage to most instant on software.

Lenovo’s version might be different though. The Verge reports that the ThinkPad X1 Hybrid will get up to 10 hours of battery life when running Android, compared with just 5 hours of run time under Windows. If you can get by with Android apps instead of Windows apps, that provides a pretty good incentive for running in media mode.

There’s no word yet on how much the new X1 Hybrid will cost, but the current Lenovo ThinkPad X1 laptop runs about $1200 and up and features a 13.3 inch, 1366 x 768 pixel display, Intel Core i-series processor, 4GB of RAM, and a choice of a solid state disk or a hard drive. The laptop has a spill-resistant, back-lit keyboard, an IPS display for wide viewing angles and a sturdy case design. It measures less than an inch thick and weighs less than four pounds.

4 replies on “Lenovo to slap Android onto upcoming ThinkPad notebooks?”