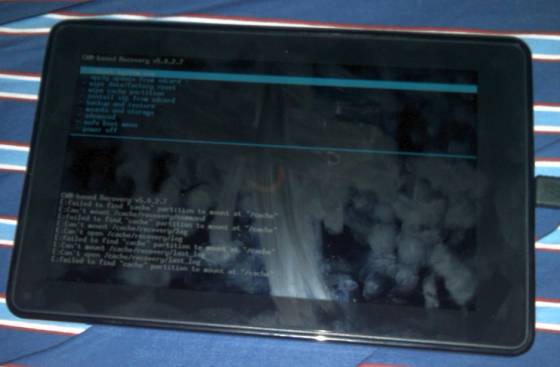 It’s only been a few days since the Amazon Kindle Fire started shipping, but early users have already figured out how to sideload apps, root the tablet, and install the Android Market. Next up? Replacing Amazon’s software with custom ROMs.

There’s no way to do that just yet, but xda-developers forum member JackpotClavin has taken the first step. He’s modified ClockworkMod Recovery to run on the Kindle Fire. Unfortunately all it does is run at the moment.

ClockworkMod is a utility that lets you make a complete backup of your device, restore from a backup, or replace the operating system with something different. You an also use it to apply patches and make other updates.

Unfortunately, ClockworkMod doesn’t recognize touchscreen input. On most device you can use the volume buttons and home button to navigate through the ClockworkMod menus — but there’s only one physical button on the Kindle Fire, and that’s the power button.

A future version of ClockworkMod could be tweaked to make use of that one button by working with long presses and short presses of that button, and there’s another recovery app called TWRP 2.0 in the works which does support touchscreens. But right now I’m just impressed that someone has managed to flash a recovery app at all just a few days after the Kindle Fire hit the streets.

Eventually, this could lead to CyanogenMod and other custom Android-based software running on Amazon’s $199 tablet.

Update 12/6/2011: JackpotClavin has not only figured out a way to use ClockworkMod — he’s modified it so that you can install CyanogenMod 7 on the Kindle Fire. We have step-by-step instructions.