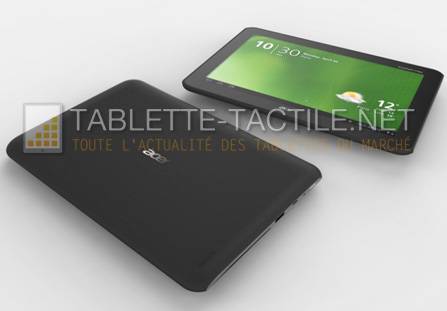 Recently an unannounced Acer tablet called the Iconia Tab A200 showed up at the FCC. The tablet appears to have a 10 inch display, a super-slim case that’s just 0.28 inches thick, WiFi, Bluetooth, and GPS. That’s about all we know for certain, but French site Tablette-Tactile may have uncovered a new photo of the tablet, as well as some more details.

The tablet will reportedly be a low cost alternative to Acer’s pricier A500 series tabelts. It will be available with 8GB or 16GB of storage, 1GB of RAM, and a microSD card slot as well as micro USB host port. The tablet is said to have a 1280 x 800 pixel display.

Since this is likely to be a budget tablet, Tablette-Tactile says it will come with an NVIDIA Tegra 2 dual core processor. While that was a state-of-the-art chip earlier this year, NVIDIA’s 1 GHz processor is starting to look a little long in the tooth.

The upcoming Acer Iconia Tab A500 and A511 tablets are expected to have 10 inch displays and Tegra 3 chips. They’ll also probably carry higher price tags than the A200.

It’s not entirely clear why Acer is launching a new 10 inch model instead of just continuing to sell the Iconia Tab A500 which launched this summer. It also has a 10 inch, 1280 x 800 pixel display, 1 GB of RAM, and NVDIA Tegra 2 chip. But it also has a thicker case than the Iconia A200 and comes with 16GB to 32GB of storage.