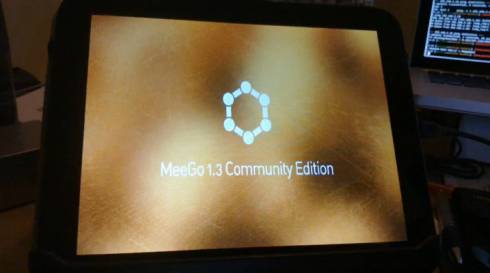 HP may have cancelled the HP TouchPad tablet, but the company has continued to push out software updates for the webOS tablet — and even if HP eventually pulls the plug on support for the operating system, we’ve seen a number of alternatives. A team of developers at CyanogenMod have already ported a slightly buggy version of Google Android to run on the tablet, and users have been loading Ubuntu on the TouchPad for months.

Now it looks like another option may be on the horizon. YouTube user crevetor has posted a video showing an HP TouchPad booting MeeGo Linux.

To be honest, that’s all the video shows. We see the tablet get to the boot screen — and no further. It’s not clear how well the OS runs on the hardware at this point — and it’s also possible that we’re simply looking at a custom splash screen and nothing more.

But if work is actually underway to port MeeGo to run on the TouchPad, it’s an interesting choice. On the one hand, MeeGo is as dead as the TouchPad. The open source, Linux-based software was originally designed to run on netbooks, smartphones and tablets with the backing of Intel and Nokia.

Nokia has pulled out of the project and put its support behind Windows Phone 7, and Intel is now backing a new project called Tizen which has a heavy emphasis on HTML5 and other web technologies.

That doesn’t mean that MeeGo is necessarily a bad fit for the TouchPad though. The platform includes a touchscreen-friendly user interface and supports apps that run in full-screen mode. While there aren’t a boatload of apps written specifically for MeeGo, the software actually tends to run on top of other Linux operating systems such as Linpus or Fedora, which means that you should be able to run native Linux apps.

We’ve also seen some MeeGo systems which add support for Android apps through a Dalvik virtual machine. The German WeTab tablet, for instance, runs MeeGo but supports some Android applications.

The HP TouchPad features a 9.7 inch, 1024 x 768 pixel display, 1GB of RAM, and a 1.2 GHz Qualcomm Snapdragon dual core processor. It was released in July, 2011 and canceled less than two months later due to poor sales. But the discontinued tablet became popular among bargain hunters looking to snag one for $149 or less when HP started liquidating the remaining inventory.