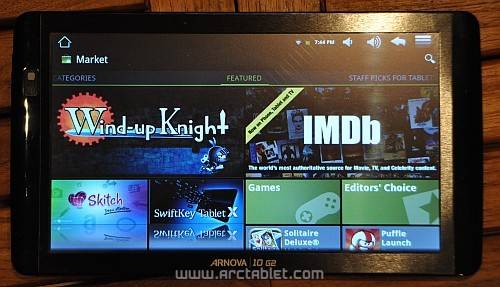 The Arnova 10 G2 is a budget Android tablet with a 10 inch, 1024 x 600 pixel multitouch display, a 1 GHz processor, and Google Android 2.3 operating system. But it’s not a Google certified device, which means that it doesn’t come with the Android Market, Gmail app, Google Maps, or some other Google apps.

But just because it doesn’t come with those things doesn’t mean it won’t run those apps.

The first custom ROM for the Arnova 10 G2 is now available. It’s pre-rooted, which means that you can install apps such as Titanium Backup which require root access. You can also install the Android Market on the tablet once the custom ROM is loaded.

The ROM was initially released by CyberSoft at the HTC Mania forum in Spain, but ArcTablet has posted a modified version that can be used with the ArcTools utility to get the Android Market up and running. ArcTablet also has instructions for restoring your tablet to its factory default state if you’re not happy with the modified firmware.