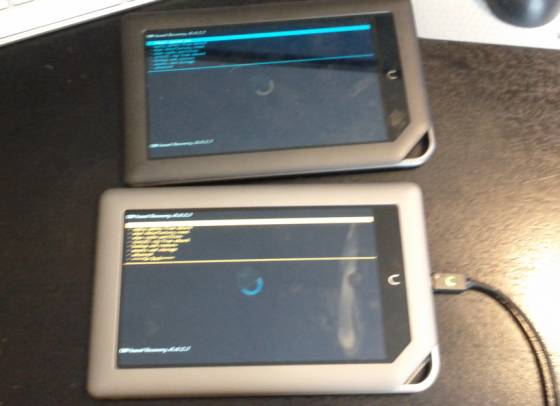 The Barnes & Noble NOOK Tablet is a 7 inch tablet designed for reading books, streaming media, surfing the web and running apps purchased from the B&N Shop. The tablet runs a custom version of Google Android, and it’s proven relatively easy to hack.

Users have already figured out how to install apps that aren’t purchased from B&N, and you can root the tablet to install the official Android Market or make other changes.

Last year’s NOOK Color shipped with an unlocked bootloader which made it relatively simple to install a full-blown version of Android on a microSD card without erasing B&N’s software. That allows NOOK Color users to dual boot the tablet, deciding whether to run the official software from the built-in storage or a custom Android build such as CyanogenMod from the SD card.

But the new NOOK Tablet has a locked bootloader which has been a little tougher to crack open. One possible explanation has been that the NOOK Tablet ships with a special version of the Netflix app which allows users to stream HD video over the internet — and that may only be available on devices with locked bootloaders as a security precaution.

Whatever the reason for the locked bootloader, it presents a challenge for anyone looking to replace the NOOK Tablet’s operating system with a custom ROM.

But now, just a week after the NOOK Tablet started shipping, Brandon Bennett has posted the first picture of the tablet running ClockworkMod Recovery, suggesting that the locked bootloader has been cracked.

ClockworkMod Recovery is a utility that allows users to flash custom software on an Android device, make a complete backup of an Android system, and perform other system-level changes. It only runs on devices with unlocked bootloaders.

Bennett, who goes by the Twitter name of @AndroidNemith, says ClockworkMod is only “somewhat” running on the NOOK Tablet so far, but he still seems to have gotten further than anyone else.

This could be the first step toward bringing CyanogenMod or other Android distributions to the NOOK Tablet. Unfortunately, it doesn’t appear to be possible to boot from a microSD card slot, which means that in order to install a new version of Android you will probably have to replace the Barnes & Noble Software. Hopefully ClockworkMod will make it possible to backup and restore the default software before making changes though.