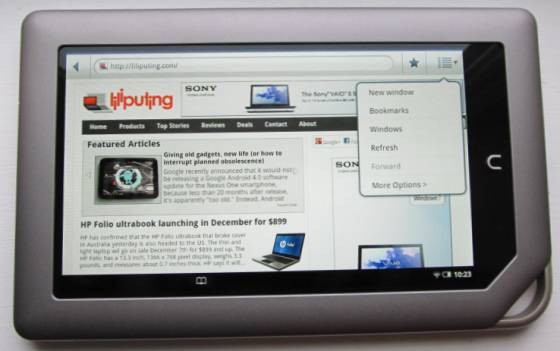 The Barnes & Noble NOOK Tablet doesn’t officially go on sale until tomorrow, but customers that pre-ordered the tablet for in-store pickup are already able to get them at B&N locations around the US today. In fact, some people got theirs last night. Home delivery should also start today.

If you’re lucky, your local store may also have a few extra units in stock. I stopped by the Barnes & Noble in downtown Philadelphia this morning and walked out $268 poorer.

I’ve only had the tablet in my hands for a few moments, but I’m impressed with the size, weight, and build quality. The screen looks gorgeous, and the tablet feels relatively zippy.

Out of the box, the NOOK Tablet certainly doesn’t feel like an Android tablet, even though it’s running a modified version of the Google Android operating system and can run many Android apps. When you first turn it on, the tablet will ask you connect to your WiFi network and to login with your B&N account or create a new one. After that, you can download books, purchase apps, sign into Netflix to watch movies, or surf the web.

The selection of apps is quite limited when compared with the Android Market, but Barnes & Noble is adding new apps all the time. Unfortunately, there don’t seem to be as many free apps. For instance, the Android Market features free versions of Angry Birds and Scrabble. You’ll have to pay $2.99 to play either game on the NOOK Tablet.

Out of the box the NOOK Tablet does include Netflix, Hulu Plus, and Pandora apps as well as an email app and a few games.

Next up on my to-do list is figuring out how to root the tablet and install other apps such as the Amazon Kindle app, or even the Amazon Appstore.

That’s not to say that the NOOK Tablet needs more apps. The overall experience out of the box appears to be quite nice if you want to use the tablet as a media tablet which can also run some third party apps. But last year’s NOOK Color turned out to be extraordinarily popular with hackers since it’s easy to root and you can run an alternate version of Android from an SD card. I’m curious to see if the new NOOK Tablet is just as easy to modify.