I’ve been playing with the tablet for a few hours, and while it’s too early to pass judgment, here’s what I can say for now. This is a great tablet for people who are looking for a reading device that can also stream movies and TV shows from Netflix or Hulu, stream music from Pandora or Grooveshark, surf the web, and check email.

But if you’re looking for a full-fledged Android tablet, this isn’t it — at least not yet. Right now the selection of third party apps available for the NOOK Tablet is pretty small. There are no official Facebook or Twitter apps, for instance, and the Scrabble and Angry Birds apps that are available each cost $2.99, even though you can find free versions of each in the official Android Market. 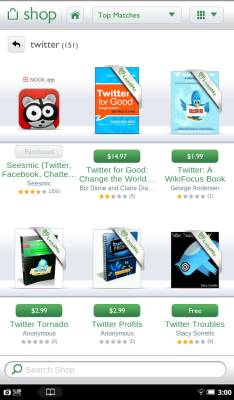 Hackers may eventually change things by rooting the tablet and adding support for additional apps as well as custom firmware which may bring support for the Android Market, among other things. Unfortunately there are some indications that the NOOK Tablet may be a little tougher to root than the very hacker-friendly NOOK Color which launched last year.

Still, if you don’t expect to be able to run a Playstation emulator or alternate keyboard app on the NOOK Tablet, Barnes & Noble has created a pretty nifty $249 eReader which also offers a number of bonus features. 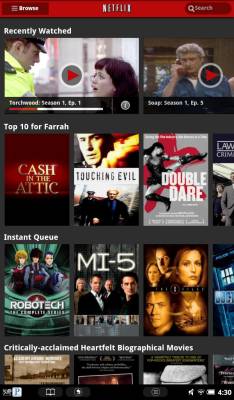 The tablet includes the new Netflix app for Android which was released this week. It presents large pictures of recently viewed videos, as well as sections for top recommendations, your instant queue, and other categories. I found scrolling up and down the home page of the Netflix app to be a little sluggish, but once videos loaded they looked absolutely amazing on the 7 inch, 1024 x 600 pixel IPS display.

The NOOK Tablet has some of the best viewing angles of any mobile device I’ve used, and videos looked good from pretty much any angle. Text in eBooks also looked stellar even when viewing the tablet from the side. 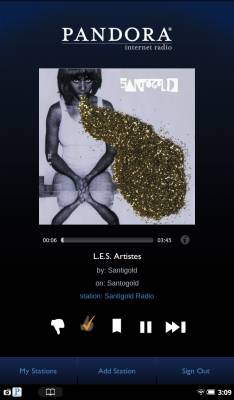 B&N also bundles the free Pandora radio app with the tablet, but users can download and install Grooveshark and Rhapsody apps for free as well — although you’ll need a subscription (or free trial) to use them. The TuneIn Radio app also lets you listen to internet radio stations, but it’ll set you back $2.99. I’ve already paid for that app on my Android phone and I don’t really feel like paying to use it again on a different device.

You can find additional apps, books, magazines, and newspapers from the B&N Shop app. There aren’t that many good apps available, but some o the ones that have been included have been tweaked to play nicely with the NOOK Tablet. 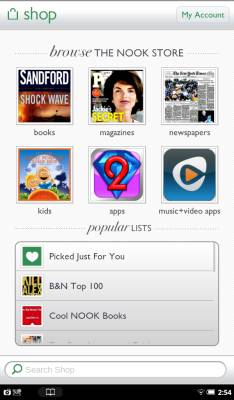 The Pandora app, for instance, has pop-up menus which look much better on the tablet than the menu screens you get on most Android phones. The Seesmic app isn’t particularly impressive, but it provides the only way to keep track of your Facebook and Twitter accounts on the NOOK Tablet (unless you want to use the web browser). 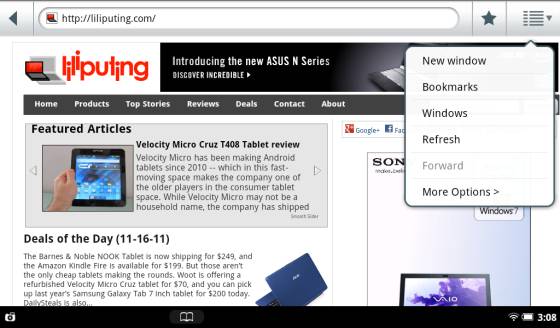 Speaking of the web browser, it’s pretty standard fare for a mobile web browser. It supports pinch-to-zoom and double-tap-to-zoom features and it can handle Adobe Flash — but only on sites that don’t block your access. No, you cannot simply avoid paying Hulu $7.99 per month to use their mobile app by visiting the website in the browser. It’s blocked. 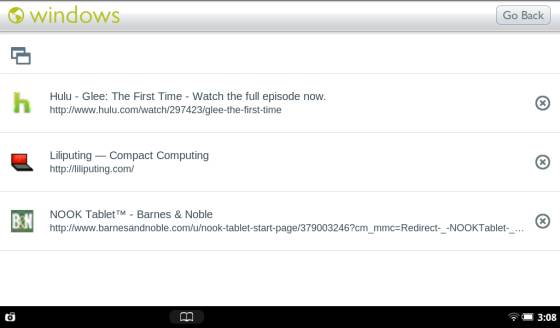 There are no browser tabs to speak of, but you can open multiple “windows” and flip between them by tapping the menu icon next to the URL bar. 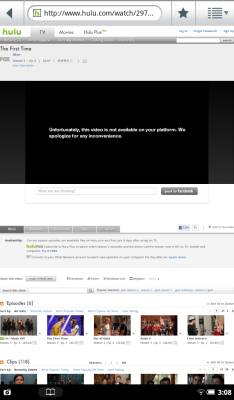 Since the NOOK Tablet doesn’t have any home, back, or menu buttons you’ll need to rely on buttons coded into the app like this for most functions. But you can trigger a “back” function by swiping your finger right-to-left across the taskbar at the bottom of the screen. This will let you go back one page in the web browser, for instance. 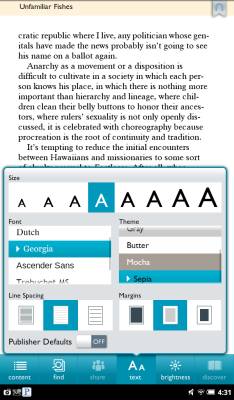 The eBook app doesn’t just let you adjust fonts, colors, and other basic settings — it feels like it’s the core app that the rest of the tablet software was built around. You can get back to the book you’re currently reading by tapping a little book icon in the taskbar. This lets you return to reading from almost any screen on the device. 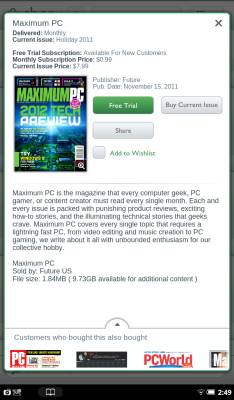 While the reading experience is quite pleasant for eBooks, magazines are another story. You can subscribe to magazines or pay to download individual issues, and most magazines and newspapers offer a 2 week free trial. But once you have you periodical loaded, you’ll notice that it’s hard to read when it’s formatted for the NOOK Tablet’s 600 x 1024 pixel display. 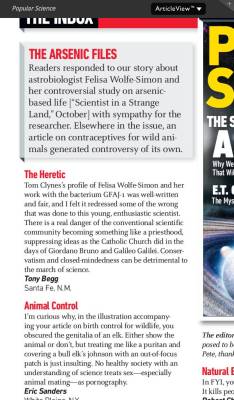 I had to zoom in to read text on most pages. And once you’re zoomed in, you need to drag the page around in order to navigate through an article. That’s because the digital magazines are laid out exactly the same way as their printed cousins, and they aren’t really formatted for a 7 inch screen. You cold probably put two or three NOOK Tablet screens together to get something the size of a typical magazine page. 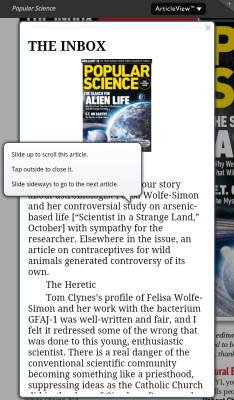 There is an article view that displays the text in a streamlined, easy-to-read way. But it eliminates most of the pictures and makes you wonder why you’re bothering to read the magazine on a digital device in the first place. 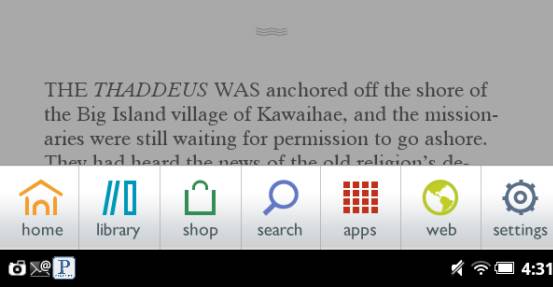 You can tap the NOOK button below the screen to bring up a toolbar with shortcuts for the home screen, library, shop, web browser, and settings. There’s also a search option for searching your NOOK Tablet and an Apps shortcut which just takes you directly to the apps section of your library.

Overall, the NOOK Tablet doesn’t feel like an Android tablet, even though Android is hiding behind closed doors. But unlike custom skins we’ve seen from HTC, Samsung, and Motorola, Barnes & Noble didn’t just dress up Android. Instead the company used Android as a building block for something new.

Android does the heavy lifting behind the scenes to make sure the tablet can connect to the internet, run apps, and support multitasking. But it would be a mistake to think of the NOOK Tablet as an all-purpose device like the Samsung Galaxy Tab 10.1 It’s much easier to use, but that’s partly because it simply doesn’t do as much.

And if you’re looking for a media consumption device rather than a computer, that might be a very good thing.

While B&N doesn’t sell music or movies, the company has partnered with some of the top streaming media services so that the NOOK Tablet isn’t just a glorified eBook reader. But it would be nice if there were more of those apps. Spotify, Rdio, and Crackle, for instance, are absent — and there’s currently no way to install third party apps without going through the B&N Shop.

You can add your own books though. The NOOK Tablet supports EPUB titles, and I emailed myself a DRM-free file and opened it on the tablet just by clicking the email attachment. You could also copy books to the device by connecting it to a PC with a USB cable and copying and pasting your eBooks.

The NOOK Tablet also supports Adobe DRM, which means you can use the tablet to read public library books on loan from libraries that use the OverDrive service. 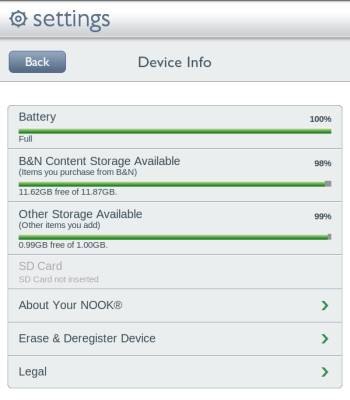 Unfortunately Barnes & Noble doesn’t leave you with a lot of room for your own music, movies, or books. The tablet has 16GB of storage, but just GB of that is available for your files. 12GB is reserved for content purchased from the B&N Shop, and the rest is used by the operating system.

But unlike some tablets, the NOOK Tablet has a microSD card slot which lets you add up to 32GB of user-accessible storage space.