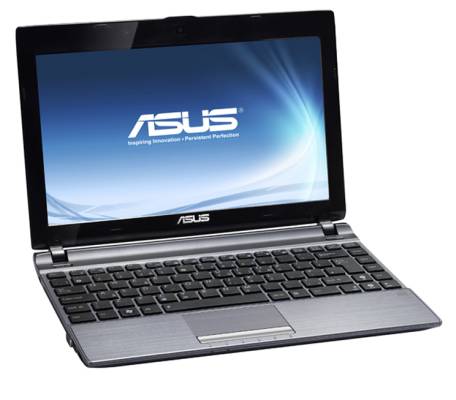 That’s because the Asus Zenbook UX21 is considered an ultrabook, which is a fancy of way of saying it weighs less than 3 pounds and measures less than 0.8 inches thick. Oh yeah, and it has a solid state disk instead of a hard drive.

But the Zenbook UX21 has a starting price of $999. The Asus U24E, on the other hand, is expected to launch in Japan for 59,800 Yen. That’s about $766 US, but computers are almost always more expensive in Japan than the US. In other words, if this laptop makes it to the States, it will likely sell for $699 or less.

That seems like a pretty good deal for a computer that most people are going to have a hard time telling apart from the pricier zenbook anyway.

Ultimately, the U24E looks like the successor to the Asus UL20 line of notebooks. For the last few years I’ve been using an Asus UL20A that I picked up for under $600 in 2009. It gets about 5 hours of battery life, isn’t much larger than a netbook, and has a much better screen and keyboard.

It’s also nearly as fast as my desktop computer, which might say more about my desktop than about the UL20A — but if you don’t need a bleeding edge computer, Asus has been putting out decent portable laptops for reasonable prices for a few years. I suspect the U24E will be offer similar value.