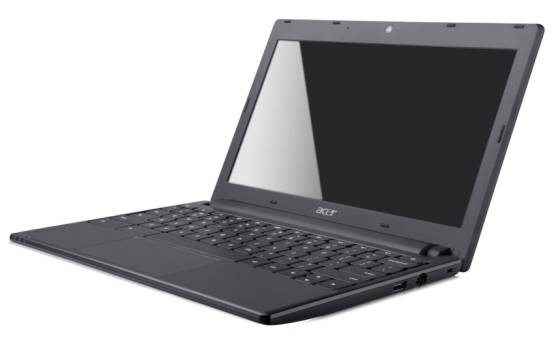 . That’s about the same price as a typical 10 inch netbook… but the Acer AC700 isn’t your typical netbook.

It’s one of the first Chromebooks, which means it ships with Google Chrome OS instead of Windows or another operating system. It’s designed to run web apps including Gmail and Google Docs, and features just 16GB of storage. The idea is that most of your data is stored online, although you can cache documents for offline access, or load music, movies, or other pictures onto the laptop and access them even when you don’t have an internet connection.

While the laptop has a larger screen and keyboard than most netbooks, you can certainly make a case that it does less than a typical netbook since it runs web apps instead of native applications (and pretty much any Windows, Mac, or Linux machine with a web browser can run the same web apps).

But up until recently Chromebooks were selling for significantly more money than netbooks. The Samsung Series 5 Chromebook still sells for $430 and up

There are some advantages to Chromebooks. Since your data is stored in the cloud, if your computer is lost or damaged you can quickly recover all of your information simply by logging into another Chromebook with your Google ID. You also don’t have to worry about keeping your software up to date, since Google pushes OS updates to the Chromebook automatically, and any changes to web apps are available as soon as the web sites are updated.

There have been reports, though, that Acer and Samsung have been having a hard time moving early Chromebooks, which could explain the price drop.

Update: Samsung has also introduced a cheaper Series 5 Chromebook. You can now pick up a black model for $349.