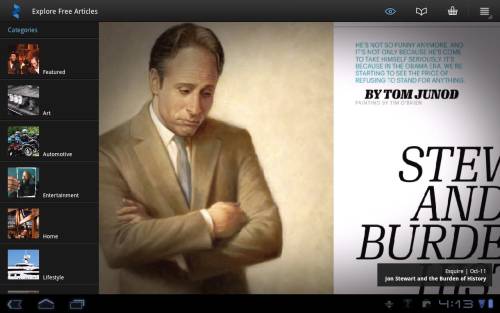 Zinio offers a platform for purchasing and reading magazines on Android or iOS devices. The Zinio app is free, but you typically need to pay if you want to read popular magazines such as Bloomberg BusinesWeek, The Economist, PC World, T3, Maxim, or New Scientist.

But now Zinio is offering a new feature called Zinio Explore that lets Android tablet users read some top articles for free. And when I say tablet users, I mean you need a device running Android 3.0 or later. Explore doesn’t work with Android 2.3 Gingerbread or earlier, even if your device is technically a tablet such as the Samsung Galaxy Tab or Dell Streak 7.

If you do have an Android tablet, you’ll be able to find new articles each day as new magazine issues are released.

The new feature seems kind of brilliant to me. By giving away free articles, Zinio is giving users a reason to download and use the app — even if they have no intention of paying for magazines. And once you actually start reading articles on a regular basis, you might think about paying a few bucks for a full issue from time to time… or a few bucks more for an annual subscription.

That’s not a bad way to appeal to customers that love reading news on tablets — but who don’t often pay for it.

Zinio already offers a few free sample issues of popular magazines each month, but the new Zinio Explore feature gives users a good reason to fire up the app every day to look for new content. Too bad it doesn’t support Android 2.3… which means that I can’t use it on my HP TouchPad.

Zinio for Android is available as a free download from the Android Market.