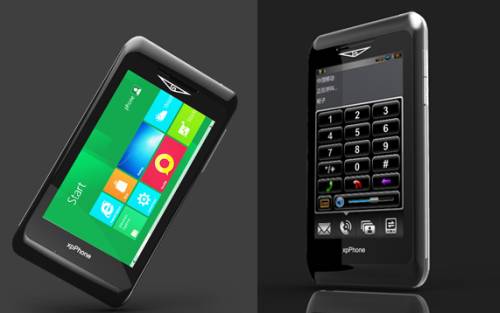 Over the past few years smartphones have become a whole new class of mobile computing device. You might have a desktop computer, a laptop, and a smartphone — because each one fulfills different needs. But a Chinese company thinks that it can kill three birds with one phone by shipping a smartphone that runs Windows.

The upcoming xpPhone 2 has a 1.6 GHz Intel Atom processor, 2GB of RAM, 112GB of storage, and a 4.3 inch display. It can run Windows 7 or Windows 8 and it also features a streamlined user interface that uses less power when you’re just using the device as a phone.

In fact, the company claims you’ll be able to get up to 18.5 hours of continuous talk time on the xpPhone 2 — although you’ll probably get substantially less battery life when firing up Windows and editing Excel spreadsheets.

Still, since the phone basically has the guts of a netbook, you can plug in a mouse, monitor, keyboard, and power adapter and use it as a desktop computer. Then when you need to move away from you desk you can disconnect the phone and slide it into your pocket for working on the go.

I’m not going to hold my breath waiting for this phone to be released outside of China anytime soon — and I’m not sure I want a phone that runs a desktop operating system. But as Microsoft takes steps to make Windows 8 more touchscreen friendly, the idea doesn’t seem as crazy as it once did.

8 replies on “xpPhone 2 will run Windows 7 and 8, make phone calls”