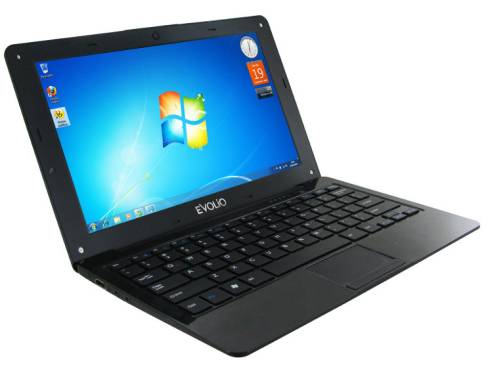 Acer, Asus, Lenovo, Toshiba, and a number of other companies are launching ultrabooks this year. They’re expected to be laptops that weigh less than 3 pounds, measure less than 0.8 inches thick, and cost less than $1000, while offering high performance Intel processors.

But if you drop the latest Intel Core i-series chips from the equation, you can bring the prices down much further. We’ve seen a number of thin and light laptops for under $400 over the past few years — typically with Intel Atom or AMD Fusion processors. Now Romanian device maker Evolio is introducing a new thin and light laptop which it calls the “lightest notebook in the world.”

I think the company might be using a little poetic license, since we’ve already seen netbooks that weigh just 2 pounds. But the Evolio U9 has a rather intriguing design. It weighs just 2.16 pounds and measures 0.7 inches thick, but features an 11.6 inch, 1366 x 768 pixel display.

The notebook has a 1.6 GHz dual core Intel Atom Cedarview processor, 2GB of RAM, and a solid state disk with 64GB or 128GB of storage. The Evolio U9 doesn’t have the fastest processor around, but it can handle HD video playback and has an HDMI port. The company says it should get up to 5 hours of abttery life.

There’s no word on how much the Evolio U9 will cost, but it’s due out in December. I suspect it will be significantly cheaper than ultrabooks such as the Acer Aspire S3 or Asus UX21.