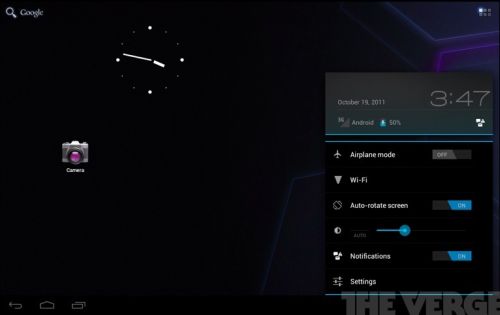 Google Android 4.0 Ice Cream Sandwich is the first version of Google’s mobile operating system that the company designed specifically to run on both phones and tablets. But during last night’s launch event the company only really talked about phones — which makes sense since the event was also the coming out party for the new Samsung Galaxy Nexus smartphone.

But Google has already released the software developer kit for Android 4.0 — which means you can take the operating system for a (slow)spin on a Windows, Mac, or Linux machine.

The folks at The Verge did just that… and adjusted the virtual screen resolution to be a bit more tablet-like to see what Ice Cream Sandwich would look like on a 7 or 10 inch tablet. And you know what? It looks an awful lot like Google Android 3.2 Honeycomb.

That’s not a huge shock… Android 4.0’s real claim to fame is that it brings many Honeycomb-like features to phones.

But Ice Cream Sandwich doesn’t look exactly like Honeycomb. You’ll spot the new Roboto font used throughout the operating system in places where Droid Sans used to be the norm. The operating system also has new the new People app whether you’re using a phone or a tablet — but when you use a tablet in landscape mode many apps display in two panels instead of one.

You can find more pictures at The Verge.

There’s no word on when we’ll start to see tablets with Ice Cream Sandwich in the wild. The Samsung Galaxy Nexus phone is expected to start shipping in November, but Google hasn’t announced any tablet launch partners yet, and while Android 4.0 should be able to run on existing Android tablets it will be up to manufacturers and wireless carriers to decide if and when to roll out software updates.

Update: The folks at Engadget performed the same experiment… but with video.