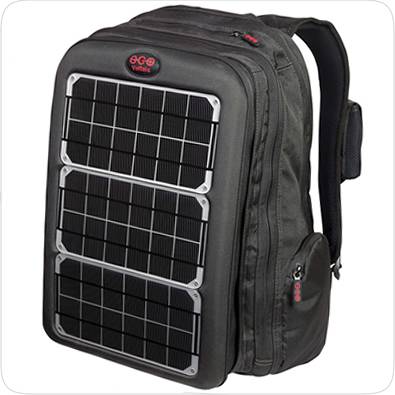 Voltaic Systems has been making backpacks and laptop cases with built-in solar chargers since 2004. But so far most of the company’s backpacks have only generated enough electricity to charge small items such as phones, cameras, or tablets.

Now Voltaic has introduced a new 10W backpack called the Array which can charge a laptop computer. If you’re attached to your current backpack, you can also pick up the slightly cheaper Fuse 10W Laptop Charger, which is designed to be strapped onto an existing rugged backpack.

It takes 12 hours of direct sunlight to charge the battery, or half that much time if you’re using the AC adapter. Voltaic says that you’ll generally get about 30 minutes of laptop run time for every hour in the sun.

The battery also has two outputs, so you can charge a laptop and phone, tablet, or other device at the same time.

Taking your laptop entirely off the grid doesn’t come cheap. The Array Solar Laptop Charging backup costs $389, while the Fuse charger is $339.

The backpack measures 18″ x 14″ x 8″ and weighs 5.5 pounds including the battery and solar panels. It can accommodate laptops with screen sizes up to 17 inches. It’s made of waterproof fabric from recycled PET.