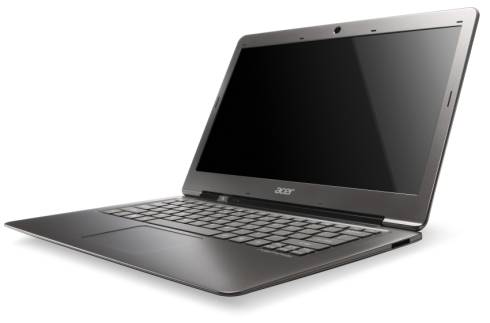 Intel envisions a day when so-called ultrabooks make up the lion’s share of the consumer notebook space. An ultrabook is basically a thin and light laptop which weighs less than 3 pounds and measures less than 0.8 inches thick. In Intel’s vision, they also tend to have premium components including solid state disks and the latest Intel chips.

The chip-maker also wants companies to sell ultrabooks for under $1000 — but it turns out that it’s kind of hard to hit that price with the components available today. And that might be why DigiTimes reports that the first two companies to ship ultrabooks are only expected to move about 100,000 units by the end of the year. That’s despite initial plans to ship two to three times as many.

Acer and Asus have already begun selling ultrabooks including the Acer Aspire S3 and the Asus ZenBook UX21 and UX31. Prices range from $899 for the entry-level Acer model to $1449 for the top-of-the-line ZenBook UX31 from Asus.

At a time when there are literally hundreds of other laptops to choose from with prices ranging from $200 to $1000, it’s tough to make a case for notebooks at those prices — even if they do have a few special features such as ultraportable designs, long-lasting batteries, and quick resume from sleep.

I certainly think there’s room in the market for ultrabooks, and at the right price I think consumer demand could go through the roof. In a lot of ways, ultrabooks are the laptops many people were hoping netbooks would be — they’re more portable than most computers, but they’re not significantly less powerful.

But right now ultrabook makers are facing a chicken-and-egg pricing problem. There’s not much reason to ramp up production until there’s higher consumer demand for the products — and I doubt there will be more consumer demand unless prices fall. Prices, meanwhile, probably won’t fall until production numbers increase (due to economies of scale).

Of course, another option is to skimp and use older, cheaper components… but then there really will be little setting ultrabooks apart from much cheaper netbooks.

28 replies on “Ultrabooks off to a slow start due to high prices?”