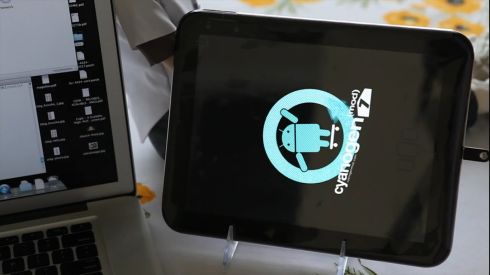 The developers working to bring Google Android to the HP TouchPad have released another video — this time showing how to install Android. The video also shows that once Android is installed, you’ll be able to switch between Android and the webOS software that comes with HP’s tablet at will.

Update: CyanogenMod 7.1 Alpha is now available for the HP TouchPad.

In previous videos we’ve seen demonstrations of Bluetooth, 3D gaming performance, WiFi, and the Android Market and much more.

HP discontinued the TouchPad in August, after it had only been on the market for about 45 days. Basically the company made a gamble when it acquired Palm for $1.2 billion last year and used the company’s software and hardware expertise to launch a new line of smartphones and tablets running webOS instead of a competing operating system such as Android or Windows Phone 7.

But the TouchPad and other HP/Palm devices weren’t selling very well, and while HP hasn’t yet called it quits on the webOS software, the company did cancel all webOS hardware this summer — and at that point the TouchPad became an overnight success as customers fell over themselves trying to get their hands on the tablet at firesale prices. It turns out that when you try to sell a decent but unremarkable tablet for $499 few people are interested. When you slash the price to $99 a lot of people become interested.

Unfortunately there’s still not a great deal of high quality software available for webOS — and with no new webOS hardware in production there’s not a huge incentive for developers to continue making apps for the platform. That’s why many people are waiting for someone to port Android to run on the tablet.

The HP TouchPad has a 1.2 GHz Qualcomm Snapdragon dual core processor, a 9.7 inch, 1024 x 768 pixel display, 1GB of RAM, and 16GB to 32GB of storage. On paper it’s a lot like many tablets that ship with Android — and the talented folks behind the popular CyanogenMod version of Android have been making a lot of progress in recent weeks in getting the operating system to run on the TouchPad.

CyanogenMod hasn’t yet released the fruits of their labor to the public — there are still a number of bugs they want to stamp out first. But the latest video shows just how easy it will be to install Android once it is available to the public. 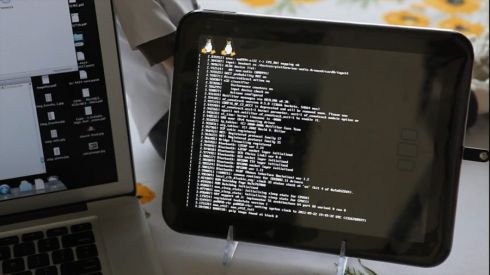 Basically you just need to install the Palm Novacom software on your Windows, Mac, or Linux computer, connect your TouchPad with a USB cable, copy the CyanogenMod software to your tablet, and run a command on the computer. That’s really about it. The whole process takes just a few minutes. 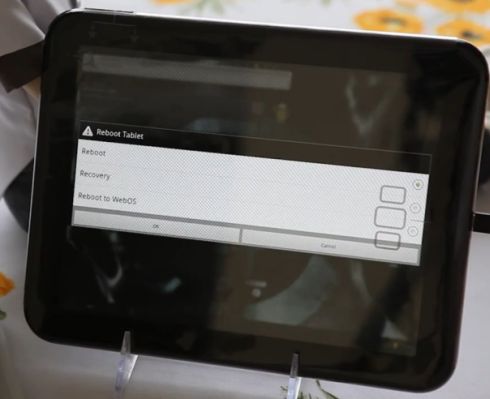 You can also switch back to webOS simply by tapping and holding the power button and choosing “reboot to webOS” from the options. At that point the tablet will restart and load webOS instead of Android.

Right now there’s no webOS app that says “reboot to Android,” but eventually the development team plans to make one. For now, when you shut down or reboot the device from webOS, it will automatically boot to Android — and if you want to get back to webOS you’ll have to choose the reboot to webOS option from there.

CyanogenMod is based on open source Google Android software. Right now that means the operating system that will eventually be made available for the TouchPad is based on Google Android 2.3.5 Gingerbread. That’s because Google hasn’t released the source code for Android 3.2 Honeycomb. While Gingerbread is optimized for phones instead of tablets, the CyanogenMod team has added some “tablet tweaks” such as on-screen buttons at the bottom of the display. 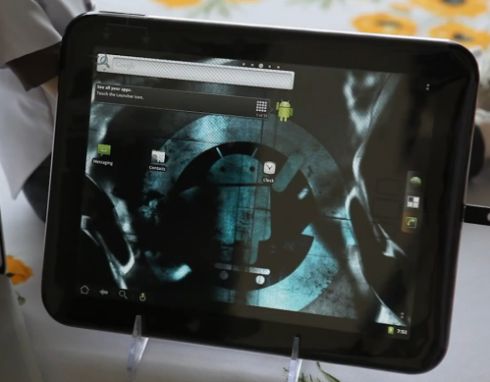 Eventually, when Google Android Ice Cream Sandwich is available, we may see an updated version of CyanogenMod or another Android distribution for the TouchPad with a more tablet-friendly user interface.

Since CyanogenMod is based on open source software, it also doesn’t include some of the closed source Google applications that you find on many Android smartphones and tablets. If you want the official Gmail app, Google Maps application, and YouTube app, for instance, you’ll need to install the gApps yourself.

It doesn’t sound like CyanogenMod will make these packages available — but if you know where to download them, you should be able to grab the apps yourself, stick them in the same folder as the CyanogenMod installation files and load them at the same time as you install CyanogenMod’s version of Android. The ROM Manager app which typically comes preloaded with CyanognMod (and which is available from the Android Market) also makes it pretty easy to install gApps — although I’ve had some trouble with that method on other devices in the past).

There’s still no word on when CyanogenMod will officially be released for Android, but at least we now know what the installation process will look like once it is available.