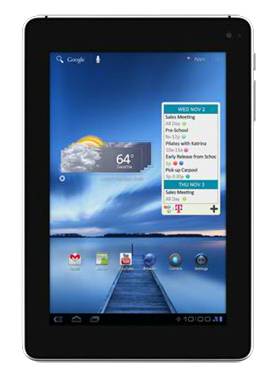 T-Mobile has unveiled the ship date for its upcoming SpringBoard tablet. You’ll be able to grab the 7 inch tablet starting November 9th. Unfortunately there’s still no word on the price.

It will also have an HSPA+ radio for use with T-Mobile’s 4G broadband network.

The wireless carrier has also announced the launch date for the Samsung Galaxy Tab 10.1. That 10 inch tablet is already available from a number of competing telephone companies in the US, but T-Mobile customers will be able to pick one up starting November 2nd. There’s no mention of pricing for that tablet either.

Update: The launch date has been pushed to November 16th, and T-Mobile has announced the pricing details. The tablet will be available for a down payment of $180, but it will cost $430 once it’s paid off over the course of a 2-year contract.