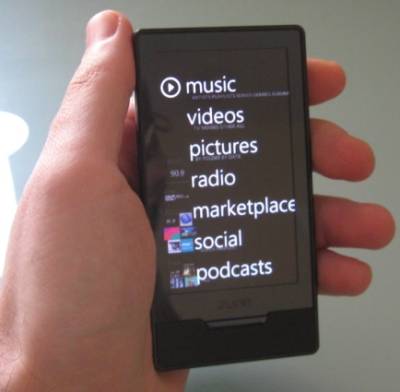 Microsoft’s Zune HD portable media player has been on life support for a while… now the company has officially pulled the plug. A page on the Zune support website states that Microsoft will no longer be making Zune players, and will instead focus on Windows Phone.

Update: Microsoft says the Zune HD isn’t dead yet… but all signs certainly point to the portable media player being on its death bed.

The move isn’t particularly surprising, since Windows Phone devices can do pretty much anything a Zune can… and much, much more. But the Zune HD was a small, affordable device for playing media, surfing the web and running a few apps that was produced by Microsoft and sold without any sort of a service contract.

Windows Phone 7, on the other hand, is software that third party device makers slap on smartphones that are typically sold by wireless carriers. You could always by a Windows Phone 7 device and use it without a voice or data plan — but you’ll end up paying a lot more than the $200 or so that a Zune HD cost.

When the Zune HD launched in September, 2009, it was basically Microsoft’s answer to the iPod Touch. It featured a 3.3 inch, 480 x 272 pixel AMOLED display and a first generation NVIDIA Tegra processor. It was a nice little piece of hardware… without much of a software ecosystem. My only major complaint when I reviewed the Zune HD a few years ago was that there were almost no good apps for the platform. Two years later that hasn’t really changed.

Microsoft promises to continue offering support for the device for the foreseeable future — and you can still find a number of retailers with Zune HD models in stock, it would appear that production of the Zune HD has ceased.

While a number of device makers are putting out Android-powered iPod touch competitors, it looks like it’s time to wave goodbye to the only such device from Microsoft.