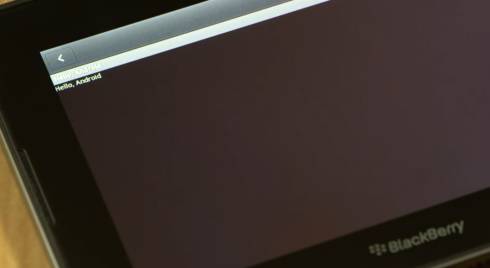 In addition to providing a sneak peek at the future of BlackBerry tablets and smartphones with the introduction of the BBX software platform today, RIM announced a few new updates for the existing BlackBerry Playbook tablet.

First, the Native Software Developer Kit, or NDK has hit version 1.0 which means the tools to create native apps for the PlayBook are finally out of beta. Developers can also write apps using Adobe AIR and other software tools.

But the much more exciting is that a beta version of NDK 2.0 is also now available — and developers can download BlackBerry PlayBook OS 2.0 beta from the BlackBerry Dev Zone and install it on a PlayBook starting today.

The new beta operating system includes a number of enhancements, but one of the most hyped new features is support for some Android applications. This will allow developers to write apps for Google Android phones and tablets, and deliver them to BlackBerry PlayBook users with minimal fuss.

PlayBook users will be able to download, install, and run Android apps just as if they were native apps written for the tablet.

Right now the beta software is aimed at developers rather than the general public. Hopefully it’s a sign that users will be able to update their devices soon as well.