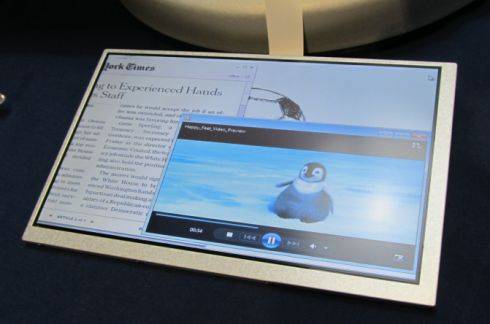 Pixel Qi makes transflective displays that look like full-color LCDs when used with a backlight, but look more like a low power, outdoor readable E Ink when you turn off the backlight on a computer, eReader, or other device. The company has been showing off its technology for a few years, but so far very few consumer devices have actually shipped with Pixel Qi displays, and every now and again I hear someone refer to them as vaporware.

But Pixel Qi founder Mary Lou Jepsen begs to differ. Recently the company received a major investment from 3M, and this week Pixel Qi announced a new partnership with component distributor All American.

Here’s what caught my eye though: Jepsen published a blog post today where she points out that “over 3 million people” are already using Pixel Qi displays. That includes screens that have shipped with OLPC XO Laptops for students in developing nations, military products used by “soldiers jumping out of airplanes,” and tablets and netbooks including the Notion Ink Adam tablet and Clover SunBook.

The new 10 inch screen will even be able to display color with the backlight turned off, which is something new for Pixel Qi.

5 replies on “Pixel Qi: Over 3 million screens in the wild”