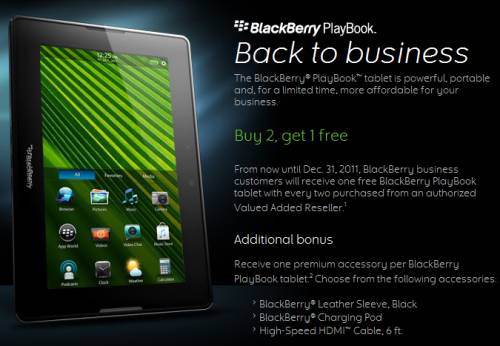 Research in Motion really wants you to buy a BlackBerry PlayBook tablet… or three. This summer the company launched a promotion that dropped the base price of the 7 inch tablet from $499 to $299. Today RIM is rolling out a new campaign that lets you buy 2 tablets and get 1 free.

Customers will also be able to pick up a free accessory such as a leather sleeve, charging pod, or HDMI cable.

It’s not entirely clear if buying two tablets at discount prices will get you a free third tablet — of the participating retailers, PC Connection appears to be the only one selling PlayBooks for $299.

The BlackBerry PlayBook features a 7 inch, 1024 x 600 pixel display, a 1 GHz TI OMAP 4430 dual core processor and the BlackBerry Tablet OS operating system which is based on QNX.

The hardware is pretty nice, but the software platform has proven a bit problematic. There aren’t nearly as many apps available for QNX as there are for Android, iOS, or even BlackBerry OS smartphones. The PlayBook even shipped without native contacts, calendar, or email apps — instead you needed to pair a BlackBerry smartphone with the device to access those functions.

RIM is planning to release a PlayBook OS 2.0 software update that will add native email, calendar, and contact apps — as well as the ability to run Android apps, which should go a long way toward making the tablet more attractive. But PlayBook OS 2.0 won’t be available to the public until 2012.