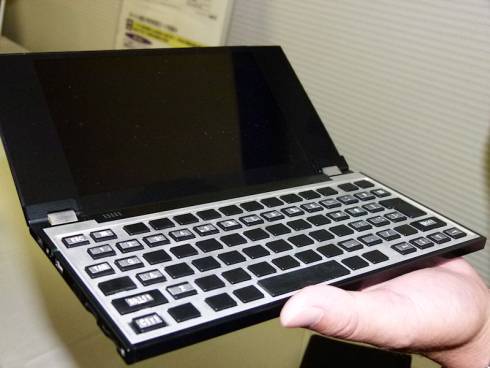 Japanese computer maker NEC is preparing a thin and light notebook powered by Google Android. The folks at PC Watch got a chance to check out an early prototype of the NEC MGX, which measures just 9.9mm thick. That’s less than 0.4 inches, making the little notebook thinner than many Android tablets.

Unlike a tablet though, the MGX has a full QWERTY keyboard and a clamshell design that lets you close the lid down over the keyboard.

While it’s not clear what version of Android it runs, the photos at PC Watch show that the MGX appears to be running Android 2.3 or earlier — which makes sense since Google hasn’t yet released the source code for Android 3.0 and up and it probably takes a little tweaking to get Android to run properly on a notebook.

The little laptop may not be ready to ship until 2013, and I doubt we’ll ever see it in the US.

Update: It looks like the notebook also has a touchscreen display and a hinge that allows you to push the screen back 360 degrees so that it rests flat against the keyboard. This would let you use the notebook as if it were a tablet.

ITMedia has also posted a video showing what the device looks like when you fold the screen all the way back: