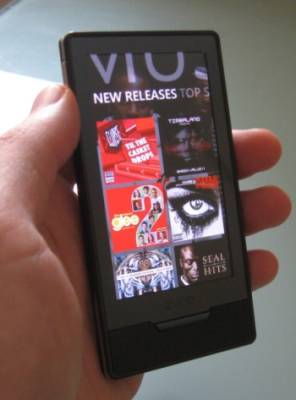 Apparently the reports of the Microsoft Zune HD’s demise have been a tiny bit  premature. The Zune HD is Microsoft’s portable media player with a touchscreen display and first generation NVIDIA Tegra processor. It’s been on the market since 2009 and the Windows Phone 7 user interface (and especially the music and video apps) were largely inspired by the Zune HD software.

This week Microsoft posted a note on the Zune support site saying that the device had been discontinued — although support would continue to be available. Now Microsoft has removed that page and the company sent out a message on Twitter saying that “no official info has been released” about a plan to discontinue the Zune HD.

So there you have it… the Zune HD isn’t dead yet. But you know what? It seems unlikely that someone at Microsoft would have posted a note saying that it was discontinued without good reason. My best guess is that the company will discontinue the portable media player soon, but the support page was accidentally posted before the official announcement.

While most of the Zune HD’s features have found their way into smartphones running Windows Phone 7 software, once the Zune HD is gone Microsoft won’t have a budget device for folks that want to enjoy media on the gone or run Windows Phone 7 apps without paying for a monthly data plan — unless the company has something else lined up to replace the Zune HD.

Microsoft has repeatedly stated that Windows Phone 7 is only for phones, not for tablets or handheld devices that don’t make phone calls. That’s probably why the software has “phone” in its name. But I certainly wouldn’t mind the Zune HD disappearing if it meant Microsoft was preparing to launch a Zune WP7 device that was capable of running apps from the Windows Phone Marketplace.

4 replies on “Microsoft: The Zune HD’s not actually dead… yet”