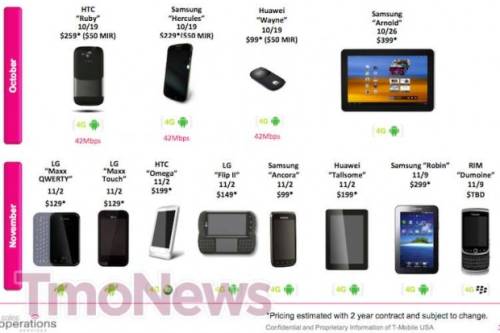 T-Mobile currently offers US customers two Android tablets: The Dell Streak 7 and the LG G-Slate. But according to a leaked product roadmap obtained by TmoNews, we can expect three more tablets to hit the T-Mobile lineup in the next month or two.

First up is the Samsung Galaxy Tab 10.1. That’s not a huge surprise since several other carriers already offer this tablet. It’s slated to hit T-Mobile on October 26th for $399 when you sign up for a contract.

In November it looks like T-Mobile will also add the Huawei MediaPad for $199 and a new Samsung tablet for $299. That device looks an awful lot like the Samsung Galaxy Tab Plus.

All three tablets will offer 4G HSPA+ radios. The Galaxy Tab 10.1 has a 10 inch display while the other tablets feature 7 inch screens. Detailed specifications for the Samsung Galaxy Tab Plus aren’t available yet, but the Huawei MediaPad features a 1.2 GHz Qualcomm Snapdragon dual core processor, a 1280 x 800 pixel display, and Google Android 3.2 Honeycomb operating system.