This morning HP was offering the HP TouchPad tablet with 32GB of storage for $249.99. The sale was spotted by a member of the PreCentral forums, but the tablet is no longer available for purchase. 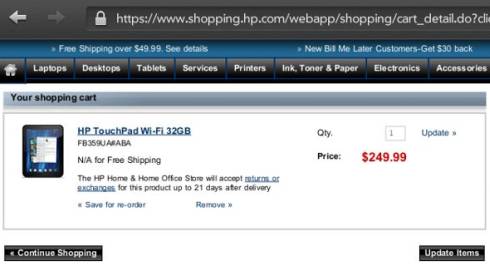 There are two interesting points to this story:

When HP first launched the TouchPad table tin July the company charged $499 for a 16GB model and $599 for a 32GB version. By those standards, $250 is an excellent price. But in August HP canceled the TouchPad and started selling off all remaining inventory for $149 or less. When you look at it that way, it looks like the tablet was selling for a $100 premium this morning.

The company sold out of $99 and $149 TouchPad tablets almost as soon as the new prices took effect. But in August HP explained that there would be one more shipment of tablets before they were gone for good.

HP employees have already had a chance to purchase some of the TouchPad tablets from that last batch, and any day now we might see more tablets go on sale to the general public. They’re expected to sell for $99 to $149. But this morning’s sale could be a sign that HP is experimenting with alternate prices… or it could just be some sort of a typo or other glitch in the system.

Still, I have to wonder what would have happened if HP had decided to set the fire sale prices at $200 for a 16GB tablet and $250 for a 32GB tablet from the get go. They probably wouldn’t have flown off the shelves quite as quickly, but those are still some pretty amazing prices for a tablet with a 9.7 inch, 1024 x 768 pixel display, 1.2 GHz Qualcomm dual core processor, a good web browser, and decent multimedia capabilities. I suspect HP still would have sold a lot of tablets at this price.

And maybe HP still could. While it’s pretty clear the company was losing money by selling tablets for $99, it’s certainly possible to build a decent tablet for around $200. Perhaps HP could pull an Amazon and sell the TouchPad for about the same price it takes to build one and attempt to make up the revenue through commissions on app sales, movie rentals, and music sales. It would certainly be one strategy for gaining market share — although it’s not entirely clear whether it would be a profitable strategy.

Still, HP has already thrown out the CEO that was at the helm when the company decided to discontinue the TouchPad, so it’s not quite too late to resurrect the tablet.

Of course, it’s possible that a fair number of the people who picked up TouchPads at fire sale prices only did so because they’re hoping to wipe the webOS operating system and replace it with Google Android.

There’s also a rumor going around that Amazon may be interested in buying webOS from HP… in which case it’d be unlikely to see the TouchPad make a comeback.