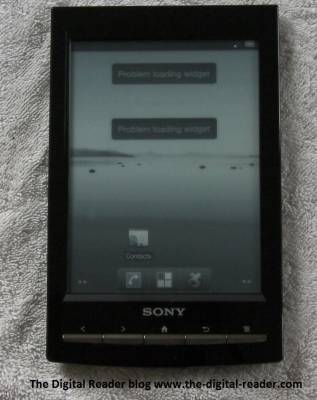 The Sony Reader PRS-T1  is a $150 eBook Reader with a touchscreen E Ink display. It’s designed to read EPUB books from the Sony Reader Store or from you personal collection, and it can also handle digital library books. But that’s only part of what makes the Sony Reader interesting.

Out of the box, the PRS-T1 runs Google Android. You don’t actually see the Android interface, because the device has basically been designed to run a single app, Sony’s eBook app.

But it’s possible to modify the device so that you have an Android home screen and app launcher — as well as the ability to install some third party applications. We first saw this trick a few weeks ago, but there are now instructions available for anyone else that wants to hack the PRS-T1.

Like most devices with E Ink displays, the Sony Reader PRS-T1 has a relatively slow screen refresh rate. So you’re not going to want to use it as an Android tablet for watching videos or even for playing most games — unless your idea of fun is playing games with a frame rate of 2 to 3 frames per second, at best.

But by hacking the tablet you can install alternate eBook apps including the Amazon Kindle app. Nate at The Digital Reader also tested Audible, an audio book app, and found that it works.

In other words, opening up the PRS-T1 to additional Android apps can make the $150 device a heck of a lot more useful… and a lot geekier.